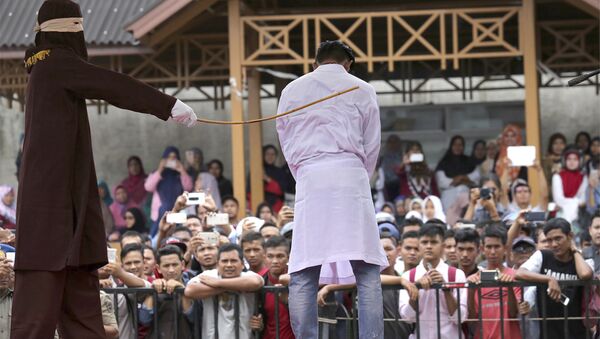 Under Sharia, or Muslim religious law, drinking alcohol, adultery, homosexuality, gambling and any displays of affection outside of marriage are outlawed. Aceh is the only Indonesian province to officially enforce such a code, even though other districts across Indonesia are also implementing Sharia-influenced laws.

According to Gulf News, a masked officer in Aceh flogged each one of the three men and three women between 20 and 22 times using a rattan cane. All six people had already spent several months in prison for displaying public affection. The punishment took place in the provincial capital Banda Aceh in front of a mosque, where onlookers could watch the flogging.

"I'm nervous because this is the first time I've seen something like this," Malaysian visitor Muhammad Rushdy is quoted as saying by Gulf News.

"But it can serve as an important lesson for us from other countries to comply with local regulations," he added.

According to Banda Aceh Mayor Aminullah Usman, flogging can help deter others from breaking the law.

"But we keep telling visitors not to be afraid to visit Banda Aceh ... because you won't be flogged if you don't break the law," Usman is quoted as saying by Gulf News.

Human Rights Watch (HRW) has repeatedly demanded that the Indonesian government eradicate Sharia in Aceh, also warning that it is on the rise in Indonesia’s Aceh province.

According to HRW, some 339 people in 2016 received multiple lashes of the cane for various violations of Sharia law in Aceh. That year was the first full year that the law was implemented since it went into effect in September 2015.

000000
Popular comments
And you want women to bear children after you beat them up for showing affection to a man? What monstrosities are these authorities in Banda Aceh? And who would want ro visit such a place, not knowing all the regulations, under threat of being caned? There must be more sane places to vacation!
Regula
20 September 2019, 01:23 GMT1
000000
Religion is the curse of humanity!
hopscotch64
20 September 2019, 02:03 GMT1
000000
Newsfeed
0
New firstOld first
loader
LIVE
Заголовок открываемого материала
Access to the chat has been blocked for violating the rules . You will be able to participate again through:∞. If you do not agree with the blocking, please use the feedback form
The discussion is closed. You can participate in the discussion within 24 hours after the publication of the article.
To participate in the discussion
log in or register
loader
Chats
Заголовок открываемого материала
Worldwide
InternationalEnglishEnglishMundoEspañolSpanish
Europe
DeutschlandDeutschGermanFranceFrançaisFrenchΕλλάδαΕλληνικάGreekItaliaItalianoItalianČeská republikaČeštinaCzechPolskaPolskiPolishСрбиjаСрпскиSerbianLatvijaLatviešuLatvianLietuvaLietuviųLithuanianMoldovaMoldoveneascăMoldavianБеларусьБеларускiBelarusian
Transcaucasia
ԱրմենիաՀայերենArmenianАҧсныАҧсышәалаAbkhazХуссар ИрыстонИронауОssetianსაქართველოქართულიGeorgianAzərbaycanАzərbaycancaAzerbaijani
Middle East
Sputnik عربيArabicArabicTürkiyeTürkçeTurkishSputnik ایرانPersianPersianSputnik افغانستانDariDari
Central Asia
ҚазақстанҚазақ тіліKazakhКыргызстанКыргызчаKyrgyzOʻzbekistonЎзбекчаUzbekТоҷикистонТоҷикӣTajik
East & Southeast Asia
Việt NamTiếng ViệtVietnamese日本日本語Japanese中国中文Chinese
South America
BrasilPortuguêsPortuguese
NewsfeedBreaking
09:37 GMTPeskov to Sputnik: Russia, India Should Boost Cooperation Amid New 'Sore Spots' in Asia-Pacific
09:33 GMTThirteen Pilgrims Injured in Drunk Driving Accident in Mexico City
09:07 GMTWoman Accusing Chris Cuomo of Sexual Misconduct Used to Work With Ex-CNN Host at ABC, Media Says
09:05 GMTVenezuelan 'Opposition Government' FM Resigns, Slamming It for Corruption and Incompetence
08:50 GMTTaiwan to Accelerate Construction of Home Grown Submarine Prototype, Reports Say
08:31 GMTRussia, India Sign Military Cooperation Agreement for Next Decade
08:17 GMTArgentina Greenlights Sputnik Light Both as COVID-19 Vaccine and Booster Shot
08:13 GMTDoctors in India Hold Nationwide Protest Against Delay in Medical Exam Counselling
08:12 GMTOne Year After Israel-Morocco Normalisation Pact, Trade and Business Still Sluggish
07:49 GMT'Sleepy Joe Stole Christmas': Trump's Save America PAC Pans Biden for Nightmare Supply Chain Crisis
07:14 GMTIndia and Russia Sign Number of Military Agreements and Contracts
07:13 GMT'You Can't Erase Internet': Alec Baldwin Slammed for Deleting Twitter Account After Rust Interview
07:08 GMT'World-Class' 1,000-Year-Old Egyptian Earring Found in Danish Field Perplexes Researchers
07:04 GMTKylian Mbappe Opens Up on His PSG Future Amid Real Madrid Transfer Rumours
06:55 GMTPoll: Most Japanese Back Ban on Visas for Foreigners Amid Omicron Concerns
06:48 GMTOne Dead and Four Injured in Prison Fire in Northwestern Russia
06:25 GMTBoris Johnson Under Fire Over 'Planned Reform Allowing Ministers to Overrule Judicial Rulings'
06:14 GMT21st India-Russia Summit: What's on Agenda as Putin Set to Arrive in New Delhi to Meet Modi
06:03 GMTMyanmar's Aung San Suu Kyi Reportedly Sentenced to Four Years in Prison
05:43 GMTDanish Professor Says Omicron to Become Dominant Strain Amid 'Worrying' Increase in Cases