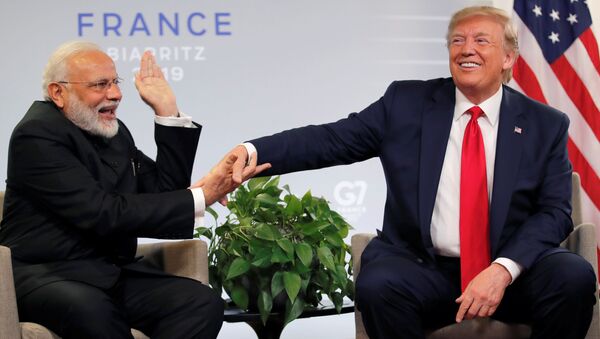 New Delhi (Sputnik): Ever since nuclear missile-equipped India and Pakistan have been head-to-head in the wake of New Delhi’s decision to strip the restive state of Jammu and Kashmir of its constitutionally-guaranteed quasi-autonomy, US President Donald Trump has suggested that he mediate and reduce the threat of conflict.

On Monday, 16 September, Trump once again offered to mediate between India and Pakistan, saying he would meet Indian Prime Minister Narendra Modi and his Pakistani counterpart Imran Khan. Both Modi and Khan are scheduled to be in New York later this month to attend the UN General Assembly Session.

“I’ll see Prime Minister Modi and I will – we’ll – be meeting with (the prime ministers of) India and Pakistan,” the US President told reporters in response to a question at the White House.

Pakistan has been at loggerheads with India over Jammu and Kashmir for several decades, as it claims to be a stakeholder in Kashmir, and New Delhi’s decision was unacceptable to it. India and Pakistan have fought three wars since they gained independence from British colonial rule in 1947; two of them were over Kashmir. Both govern part of the region but claim the territory in full.

Trump had first made a claim that Indian Prime Minister Narendra Modi had sought his help to resolve the Kashmir issue, a claim emphatically rejected by New Delhi. The claim was made during a meeting with Pakistan's Prime Minister Imran Khan during the latter’s visit to Washington in July.

But during his meeting with Prime Minister Modi on the sidelines of G-7 Summit in the French town of Biarritz, the US President made a U-turn and said Indian and Pakistan can resolve the issue between themselves.

Again, earlier in September, Trump said, his relations with both India and Pakistan are good and his offer to mediate still remains, but it is up to New Delhi and Islamabad to respond. He however, said the relationship between the two nuclear-capable South Asian neighbours were “less heated” than earlier.

Trump’s latest statement comes ahead of Narendra Modi’s visit to the United States this month, when a meeting with President Trump is in the cards.

Both would share a stage at Houston, Texas at an event named “Howdy, Modi!” – a gathering of over 50,000 members of the Indian diaspora community – which is set to be the first US presidential address of such a huge Indian-American audience in one place.