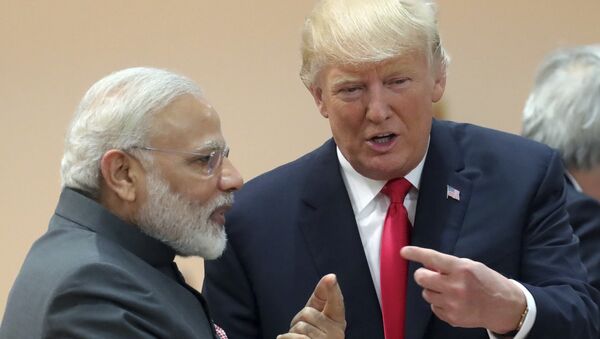 © AP Photo / Michael Kappeler/Pool Photo
Subscribe
International
India
Africa
New Delhi (Sputnik): Indian Prime Minister Narendra Modi is slated to address a huge gathering of Indian-born Americans in Houston, Texas on 22 September, during his visit to the US; President Donald Trump will also be at the event.

Prime Minister Modi said the gesture of President Trump “highlights the strength of the relationship and recognition of the contribution of the Indian community to American society and economy”.

The special gesture of President @realDonaldTrump to join us in Houston highlights the strength of the relationship and recognition of the contribution of the Indian community to American society and economy. #HowdyModi

A special gesture by @POTUS, signifying the special friendship between India and USA!

Delighted that President @realDonaldTrump will join the community programme in Houston on the 22nd.

Looking forward to joining the Indian origin community in welcoming him at the programme.

​The event, named “Howdy, Modi!” – Shared Dreams Bright Future” is hosted by Texas India Forum at NRG Stadium in Houston. It will be attended by representatives from 48 US states and was fully sold-out within three weeks of its announcement. The live audience will be the largest gathering for an invited foreign leader visiting the United States other than the Pope, according to the organisers. This would also be the first time an American President would be addressing such a huge Indian-American audience at one place in the country.

This is slated to be the third meeting between Modi and Trump within a span of three months, and has been described as a “great opportunity” by White House Press Secretary Stephanie Grisham in a statement.

"It (the Modi-Trump joint rally) will be a great opportunity to emphasise the strong ties between the people of the United States and India, to reaffirm the strategic partnership between the world's oldest and largest democracies, and to discuss ways to deepen their energy and trade relationship," reads Grisham’s statement.

During his first visit to the United States, after taking over as Prime Minister in 2014, Modi addressed a similar public meeting at Madison Square on 28 September 2014, which was attended by over 20,000 Indian-Americans. There are about three million US citizens who have roots in India.

Although Prime Minister Modi and President Trump share a warm personal rapport, there is an undercurrent of distrust between the two countries, especially with respect to trade issues. The Trump Administration revoked India's preferential trade privileges earlier this year forcing the country to impose retaliatory tariffs on 28 US products from June.

New Delhi and Washington have also had issues relating to India's import of defence equipment from Russia, which faces US sanctions. India, however, sidestepped US objections and went ahead with a deal to acquire five S-400 air defence missile systems, describing it as being “in the national interest”.

Trump had also offered to mediate between India and Pakistan over Kashmir after heightened tension between the two countries following New Delhi’s decision to strip the restive Jammu and Kashmir state of its special status. India however, politely refused the offer, saying there was no scope for third party mediation in its internal affairs.