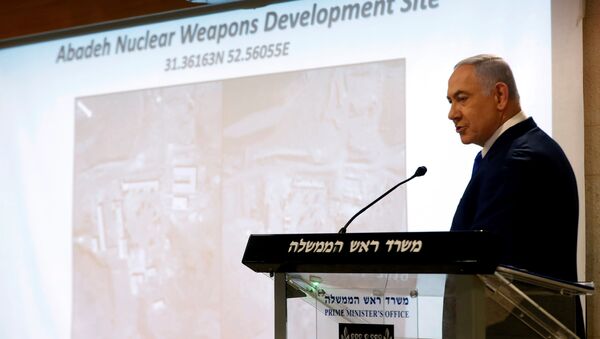 The main reasons behind the Israeli’s PM visit this time around are “to minimise the Iranian role in the region, put pressure on Iran to limit its logistic (financial and military) support to Palestinian terrorist organisations, and the Syrian threat from the Golan Heights,” according to Noor Dahri, Executive Director, Islamic Theology of Counter-Terrorism, a counter-terrorism think tank in the UK, and independent researcher on the Middle East.

Netanyahu has accused Tehran of using Syria to launch its aggression against Israel.

“In the past month, we have seen a sharp increase in Iran’s attempts to use the territory of Syria to attack us and to place missiles there that will threaten us. We are not ready to put up with this threat, so we must make sure there are no frictions between us,” the Israeli PM said at the start of the meeting with Putin.

“Russia knows better about Iran than Israel because Russia is the only powerful and strong country that backs Iran in the international arena,” Mr. Dahri said. “The US cannot obtain the goals that Israel wants about restricting the Iranian role in the region because of Russian support. Bibi wants Putin to play a crucial role in order to minimise the Iranian threat against the state of Israel.”

Israel has carried out hundreds of strikes against Iranian targets across Syria and Tel Aviv and Moscow have been working to coordinate their military actions in Syria and avoid accidentally trading fire.

The countries signed a deal in 2015 under which Israel cannot target Russian military installations and must share the intel or some of its operational information before conducting airstrikes, Dahri explained.

That did not prevent a tragic incident in September last year when a Russian plane was downed by Syrian air defences during an Israeli raid and Moscow blamed Tel Aviv for the accident.

Earlier this week, Netanyahu announced that he would annex the Jordan Valley in the West Bank if he is re-elected in next week’s parliamentary polls. Russia along with the Palestinian leadership, Arab countries, the UN and the EU has condemned the proposal.

The Russian Foreign Ministry said on Wednesday that Netanyahu’s plan could “lead to a sharp escalation of tension in the region and undermine hopes for the establishment of a long-awaited peace between Israel and its Arab neighbours.”

“Russia runs the Middle East policy successfully, not the US anymore, and Israel is not in a political position to go against Russian interests. The Russian Foreign Minister has openly condemned the Netanyahu announcement and Israel cannot fulfil her promise without Russia’s agreement,” Mr. Dahri explained.

Israel must also rely on Russia to play a crucial part in a peace deal with Palestine otherwise Netanyahu won’t be able to achieve stability and peace, according to Dahri, who also called US President Donald Trump’s long-awaited peace plan for Israel and Palestine, dubbed 'the deal of the century - “useless”.

“The Palestinian leadership put that deal in a bin and this deal is nothing but a lollipop to the world. No, any deal can be successful without Russian agreements. The US has made many deals but those all deals and pacts did not stop terrorism in Israel. Therefore, these types of agreements and deals are unsustainable,” Mr Dahri said.

When it comes to Israeli elections Putin told Netanyahu that he hopes that “whoever takes control of the Knesset will preserve the friendship between our countries and strengthen our relations in the future.”

Putin is not happy with the Israeli PM's promise to annex a big chunk of the West Bank, so will not support this political announcement that may help him to win the election.

“Russian has opposed and condemned his political annexation announcement, therefore, there are fewer chances that Likud can get any benefit from Russian administration and, indeed, it will affect BIBI’s political image in the election. As I said previously that Putin is not happy with Bibi’s announcement, this is why Bibi flew in rush to meet Putin and try to convince him that this announcement was nothing but a political slogan to his voters,” Dahri concluded.

During the talks in Sochi, the Russian leader told Netanyahu that he has accepted Israeli President’s Reuven Rivlin invitation to visit Israel to mark the 75th anniversary of the liberation of Auschwitz, but whether Putin will be meeting Netanyahu once again or another Israeli Prime Minister will be clear after the 17 September vote.

000000
Popular comments
Israel should really abandon it's "beggar thy neighbors" and hawkish policies. Living in peace with your neighbors and jointly creating development and wealth in the Middle East is the better way to exist.