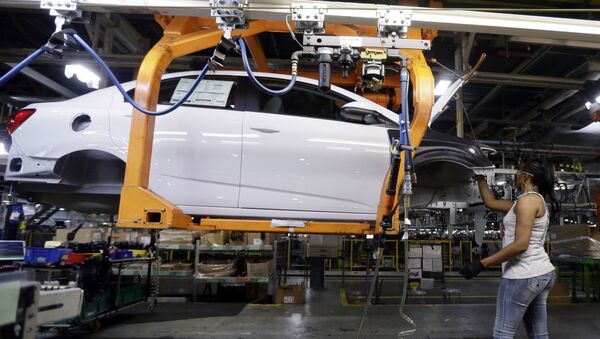 Citing significant differences with the company on wages, health care, and many other issues, the union's vice president, Terry Dittes, told local union officials in a letter that a decision on whether to strike will be made Sunday, AP reported.

Dittes says in his letter to union officials, cited by AP, that they will work until the deadline in an effort to reach an agreement, adding that the union and the employer are currently far apart on the use of temporary employees, job security and profit-sharing.

The union said in a letter to GM that union members will report for regular shifts on Sunday.

The news comes amid an ongoing investigation into a union leader embezzlement of hundreds of thousands of dollars that is unrelated to the impending strike.

According to US-based media reports, UAW officials have been under investigation for years in connection with alleged kickback and bribe schemes. In August, agents for the Federal Bureau of Investigation (FBI) reportedly raided the home of United Auto Workers President Gary Jones as part of a US government probe into corruption in the auto industry. Jones has not been charged with any wrongdoing.

According to investigation documents, cited by Reuters, Vance Pearson - second in command of the UAW - and other leading union officials "submitted fraudulent expense forms seeking reimbursement from the UAW's Detroit headquarters for expenditures supposedly incurred in connection with Region 5 leadership and training conferences". The UAW's 'Region 5' covers 17 western and southwestern US states.

The officials "used the conferences to conceal the use of hundreds of thousands of dollars in UAW funds to pay for lavish entertainment and personal spending for the conspirators", according to Reuters, citing documents.

The case also reportedly singles out a dinner at a local restaurant on New Year's Eve 2016 that cost $6,600, including four bottles of Louis Roederer Cristal champagne for a total of $1,760, Reuters said.

In an earlier statement, cited by Reuters, the UAW said that while it found the allegations "very concerning, we strongly believe that the government has misconstrued any number of facts and emphasize that these are merely allegations, not proof of wrongdoing".

The UAW represents tens of thousands of workers in US presidential election battleground states of Ohio and Michigan.