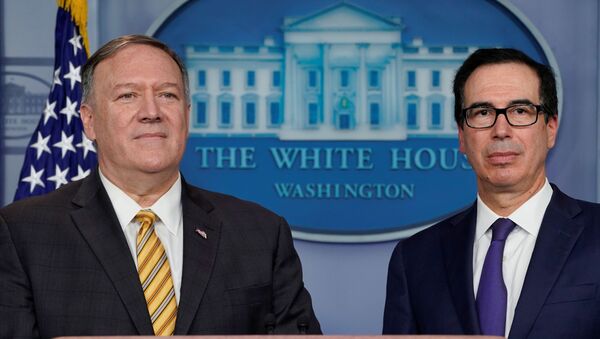 The US Treasury has imposed new sanctions on Hamas, the Daesh* terrorist group, and Iran’s Islamic Revolutionary Guard Corps under a new executive order, according to a statement.

US President Donald Trump has issued an executive order to allow the Treasury to expand sanctions on terrorist leaders, with the department imposing sanctions on Hamas, Daesh*, and the Iranian Islamic Revolutionary Guard Corps, which Washington designated as a terrorist organisation earlier this year amid increasingly escalating tensions with Tehran.

"I have issued an Executive Order to modernise and expand sanctions to combat terrorism", Trump said in a statement released by the White House. “The Order enhances our ability to use powerful sanctions to target terrorists and their supporters and deprive them of their financial, material, and logistical support worldwide. Foreign financial institutions are now on notice that they risk sanctions if they knowingly conduct or facilitate any significant transactions with designated terrorists and terrorist enablers".

Meanwhile, US Secretary of State Mike Pompeo stated that the US Department of State has designated 12 individuals and entities affiliated with Daesh, Hezbollah, and other groups under a new executive order.

This move, combined with other steps taken by the State Department, represents "some of the furthest reaching designations of terrorists and their supporters in the past 15 years", the Treasury added.

Prior to this, Washington designated three Palestinians and one Lebanese national for funnelling money to Hamas, which the US considers a terrorist organisation.

The US has for some time been calling on other countries to designate Hezbollah and Hamas as terrorist organisations, adding that attempted operations by the former have been disrupted in recent years in the Americas, the Middle East, Europe, Africa, and Asia.

Washington and Tehran have been in dispute with each other since the United States withdrew from the Iran nuclear deal last year, re-imposing sanctions on the Middle Eastern nation. The move was also followed by an escalation of tensions in the Persian Gulf, where several tankers have been attacked, prompting the United States to increase its presence in the area. Iran, in its turn, downed a US drone over the coastal Hormozgan area, prompting threats by the United States.