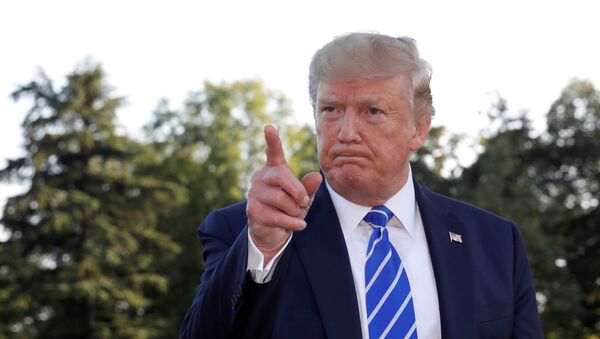 WASHINGTON (Sputnik) - US President Donald Trump said on Monday that US peace talks with the Taliban are dead after the group claimed responsibility for an attack that killed an American soldier.

On Saturday, following deadly terrorist talks in the Afghan capital of Kabul, Trump said via Twitter that he canceled plans to hold secret Camp David talks with the Taliban leadership and Afghan leaders on Sunday.

Speaking to reporters at the White House on Monday, Trump said the decision to cancel the meeting was his alone, and he did not discuss it with anyone else.

The US and the Taliban have for nearly a year been attempting to negotiate a peace deal that would ensure the withdrawal of foreign troops in exchange for the movement's guarantee that the country will not become a safe haven for terrorists. The talks, however, excluded the Afghan government as the Taliban considers it a US puppet.

Trump was reportedly planning to meet Taliban leaders at Camp David and hold a separate meeting the same day at the presidential retreat with Afghan President Ashraf Ghani.

On 2 September, a huge explosion hit Kabul's PD9 district, where foreign troops and agencies are located, just hours after US Special Representative for Afghanistan Reconciliation Zalmay Khalilzad‏ shared with the nation's leadership the details of a peace deal drafted during the ninth round of talks in the Qatari capital of Doha.

The attack, which the Taliban have taken responsibility for, left 16 dead and 119 wounded.

Three days later, three explosions rocked Kabul, killing dozens of people, including a US soldier. The Taliban again claimed the responsibility for the attacks.

*The Taliban is a terrorist organization banned in Russia and many other countries.