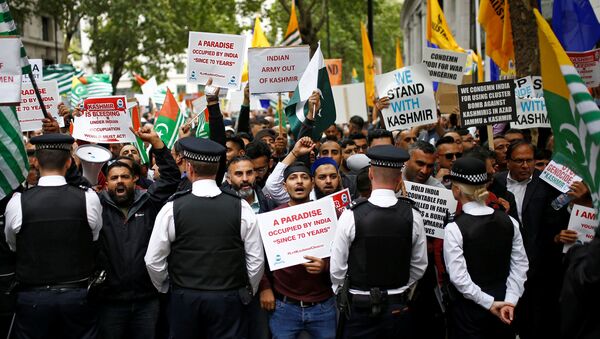 New Delhi (Sputnik): India's External Affairs Ministry has spoken to a senior British diplomat to lodge a formal complaint about recent protests in London over Kashmir. India also shared evidence of vandalism at its High Commission.

The diplomatic meeting took place a day after the Indian High Commission was allegedly damaged by protestors in London on 3 September.

Sources said the Indian External Affairs Ministry expressed serious concern to the British Deputy High commissioner in New Delhi over an "unruly demonstration by Pakistan incited elements” and “consequent organised vandalism of the property of the High Commission of India in London."

The Indian High Commissioner in London Ruchi Ghanashyam also met the Director General of the British Foreign office and shared evidence of vandalism at the commission’s property. India says that this is the second time in less than a month that such an incident has taken place.

The British government strongly conveyed that "physical damage to High Commission property was completely unacceptable" adding that the "safety and security of all diplomatic missions and their staff are of upmost concern to the UK".

Dramatic visuals from outside the Indian mission in London wr Pakistani diaspora & Khalistanis protested. India has taken up the anti-India protest with UK which British High Commission in Delhi has described as "largely peaceful". pic.twitter.com/51A5JWcfoj

The first incident of large scale violent protests happened on India's Independence Day on August 15 in which hundreds of people, including members of the Kashmir Student Action and the SOAS (School of Oriental and African Studies) India Society, gathered at Trafalgar Square in London to protest over India's actions in Kashmir.

The protests come after India scrapped Article 370 of its constitution that had granted special status to the state of Jammu and Kashmir for seven decades.