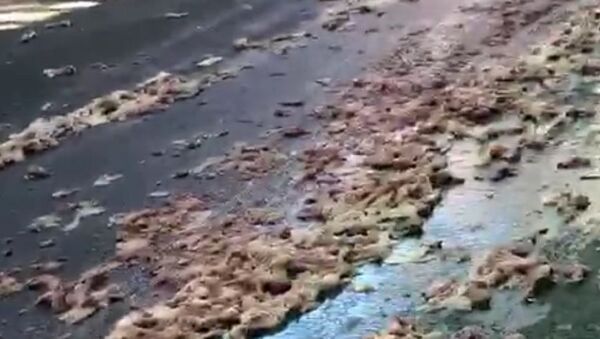 "When I first saw it, it was just like a white mound, much more cohesive than in the video [...] It was a large amount of chicken" the eyewitness who has caught the accident on tape told BuzzFeed News on Friday.

Does anyone know what the hell kind of chicken massacre happened in Boerum Hill? pic.twitter.com/Wfk73zm1jZ

According to the eyewitness, cited by BuzzFeed, the chicken did not smell as bad as it looked, because it seemed "pretty fresh", suggesting that "it was clean chicken, probably headed to Popeye's or something [...] It looked like some weird piece of abstract art".

"I almost slipped when I was taking [the video] because I stepped on a piece of chicken fat. Nearly took a header", the eyewitness told BuzzFeed.

A spokesperson for the NY Department of Sanitation said that the response crew arrived quickly and noted that an investigation into the origins of the poultry disaster has been launched.

The cause of the incident remains unknown, but the poultry catastrophe instantly went viral on social media and local netizens suggested a conspiracy behind the incident.

Somebody just got "sent a message" in the sandwich wars

KFC sending a message to Popeyes.

It’s called Sacrificing to the gods