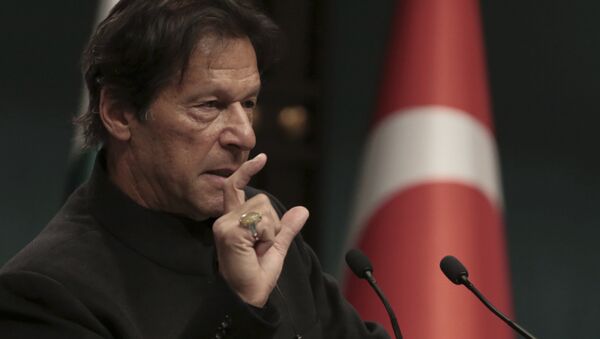 New Delhi (Sputnik): Pakistan observed “Kashmir Hour” on Friday from 1200 noon, when movement of people and vehicles came to a standstill, in solidarity with the people of Indian-administered region.

Prime Minister Imran Khan, who addressed a public meeting in the Pakistan-administered stegment of Kashmir, vowed to support the people of Indian-administered Kashmir until they get freedom.

“It’s time to teach them (India) a lesson. The entire world is witness to the ongoing situation in Kashmir,” said Imran Khan.

​Khan criticised United Nations for what he said, its “silence” as Muslims suffer in Kashmir. “Until the region becomes free, I will fight for Kashmir at every possible forum,” added Imran Khan.

​The stand-off between the nuclear-powered neighbours was heightened ever since New Delhi amended Article 370 and 35A, which had granted Jammu and Kashmir a special status. There were also increased incidents of cross-border shelling along the Line of Control (LoC).

Pakistan, which also claims Kashmir, came out strongly against the Indian decision and in protest expelled India’s envoy to Islamabad, downsized its diplomatic mission in New Delhi, suspended trade and snapped communication links. Islamabad has also threatened to close its airspace to India.

Islamabad had escalated the issue to the United Nation’s Security Council, which discussed it a closed door meeting. New Delhi had told the world body that its move to scrap Article 370 and 35A was an internal matter and asked Islamabad to “accept the reality”.

Kashmir has been a bone of contention between the two countries since they gained freedom from British colonial rule in 1947. Both govern it in parts, but claim it in full. They've also fought two wars over Kashmir.