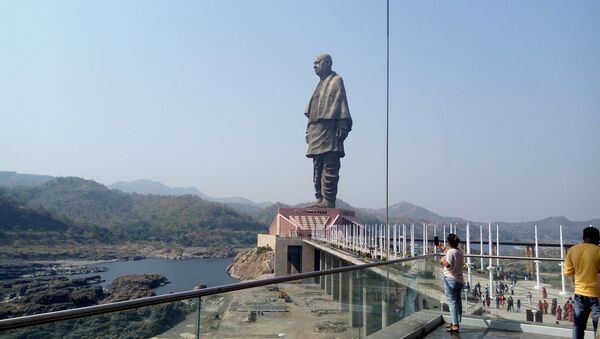 Being the world's highest statue and one of the engineering marvels of India, the sculpture was featured in TIME magazine's "Greatest Place 2019" list along with Soho House, a private club in the Indian city of Mumbai.

The statue, which was the initiative of the Modi government, was built to pay homage to Sardar Vallabhai Patel who was the first Home Minister of Independent India.

Modi took to Twitter to express his happiness over the news and noted that a record of 34,000 people visited the site in a single day, boosting its status as a popular tourist spot.

In the official description of the statue, TIME Magazine wrote, “The world’s tallest statue, was unveiled last fall, and stands at 597 ft on an island in the Narmada River. It towers over the Sardar Sarovar Dam in the western Indian state of Gujarat, offering visitors the chance to see views of the nearby mountain ranges from its chest.”

“The tourist attraction pays homage to Sardar Vallabhbhai Patel, who became India’s first Deputy Prime Minister in 1947. Although Patel is touted as a symbol of national unity, he has more recently been claimed as an icon of right-wing Hindu nationalists -meaning that to some critics, the record-breaking statue is a monument to the country’s political divisions, as well as to Patel,” added the magazine.

Apart from the statue, Mumbai’s Soho House also made it to the list of “Places to stay”. An 11-storey building, overlooking the Arabian Sea that houses a library, a cinema with 34 seats and a rooftop bar and pool.

Ecstatic with the news, netizens along with several politicians, took to Twitter to celebrate the feat with congratulatory messages and videos of the site.