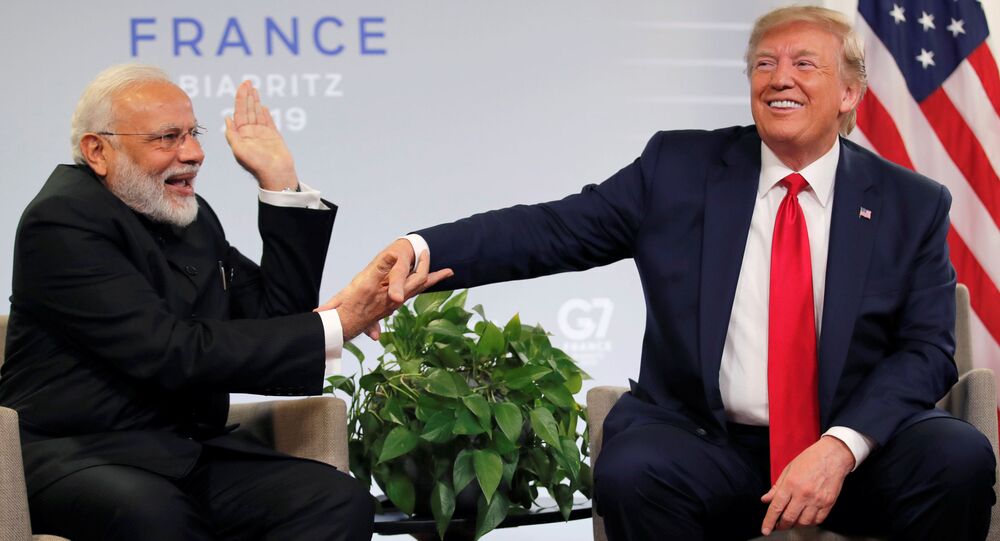 New Delhi (Sputnik): The Indian Twitterati were left in peals of laughter over US President Donald Trump’s joke on Prime Minister Narendra Modi’s English during the annual G7 summit in France, where world leaders have gathered to discuss a wide array of global issues.

Social media users draw all kinds of metaphors from Modi's tap on Trump's hand after the two busted into laughter.

In a video doing rounds on social media on Modi's meeting with Trump, the two leaders shared a light moment while shaking hands across their chairs.

During the interaction, Prime Minister Modi said in Hindi while addressing a question," I think you should let us have the discussions first, then we will let you know whatever is needed."

The two leaders, including many others in the room, busted into laughter.

Netizens soon took to Twitter to share hilarious memes, while taking a dig at Modi tapping the clasped hand of President Trump.

Trump's face after that slap on hand 😂😂 pic.twitter.com/cZdktYVpWj

PM Modi to Imran Khan after this super meet with President Trump pic.twitter.com/Wm8SF8DeOk

Prince Williams : been there, felt that!😂 pic.twitter.com/BFy4eciGyh

​Others who were left in stitches called it the  "video of the day".

Video Of The Day.