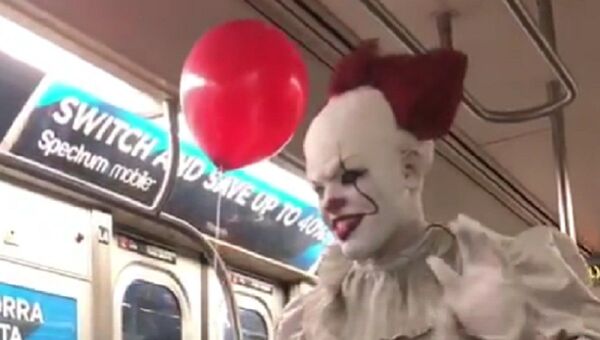 A man dressed as creepy clown film character Pennywise from the film adaptation of Stephen King's famous horror novel "It" appeared on Friday in New York's subway. The uncanny clown had the same eerie red balloon as in the original story and uttered the character's spooky phrase: "We all float down here”.

Magician Alejandro Torres, 25, told the NY Post that his brief stroll through a Manhattan L train on Friday was enough to nearly clear out the whole car.

“When I first boarded, everybody was freaked out”, Torres said, cited by the NY Post.

The magician told the NY Post that he was on his way back from a video shoot to his home in Brooklyn when he decided to keep wearing the costume of Pennywise for the subway ride. A stranger filmed him inside of the train.
According to Torres, he has been filming himself as Pennywise for awhile and plans to release this footage on social media next week, timing his debut with the release of the King/Pennywise sequel "It Chapter Two" in September.
Torres has also copied the creepy voice and mimics of the eerie clown. “I have seen the first one [...] I rewatched it earlier this week to hear […] the voice to get it down”, Torres said, cited by the NY Post.
Newsfeed
0
Access to the chat has been blocked for violating the rules . You will be able to participate again through:∞. If you do not agree with the blocking, please use the feedback form
The discussion is closed. You can participate in the discussion within 24 hours after the publication of the article.
To participate in the discussion
log in or register
loader
Chats
Заголовок открываемого материала