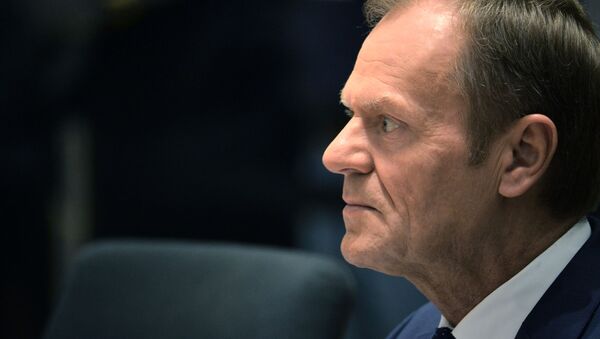 Earlier, following remarks by US President Donald Trump that he would "certainly" support Russia's return to the G7 to recreate the G8 group of nations, a 'high-ranking source' in Brussels told reporters that doing so would be a "sign of weakness."

European Council President Donald Tusk said the European Union categorically rejects President Trump's logic in inviting Russia back into the G7, saying he would try to convince the bloc's other leaders that it would be better to invite Ukraine as a guest to the next G7 meeting instead.

"One year ago, in Canada, President Trump suggested reinviting Russia to the G7, stating openly that Crimea's annexation by Russia was partially justified, and that we should accept this fact. Under no condition can we agree with this logic," Tusk said, speaking at the G7 summit, which kicked off in Biarritz, France on Saturday.

"When it comes to the speculations about inviting Russia to the table, I would like to say this: first the reasons why Russia was disinvited in 2014 are still valid. What is more, there are new reasons, such as the Russian provocation on the Azov Sea," Tusk added, referring to the November 2018 incident in which Ukrainian navy vessels attempted to stage a provocation in the Kerch strait by passing through Russian waters linking Crimea to the Russian mainland.

Russia, Tusk argued, has not 'earned' the right to reenter the club. "Today I will try to convince my interlocutors that it would be better to invite Ukraine, as a guest of course, to the next G7 meeting, to hear the opinion of their new president. I talked with him about it two days ago, and I know he would be very interested," he said.

Tusk warned that Saturday's summit would be a 'difficult test of unity and solidarity' among members of the bloc amid the various trade conflicts between the countries. Tusk said such conflicts have a potential to further erode 'already weakened trust' among G7 members, and that the past year has shown that it is 'increasingly difficult' for the countries to find a common language.

Tusk also warned Trump against using tariffs for 'political reasons', saying that doing so could be risky for the entire world, including the EU.

Tusk's Role in the Ukraine Crisis

During his term as Poland's prime minister, Donald Tusk played a key role in pushing the European Union's Eastern Partnership initiative, aimed at increasing the EU's influence in Ukraine ahead of the 2014 Maidan coup d'etat. As the Ukrainian crisis heated up, Tusk's Poland was openly involved in the events leading up to the coup, with then-foreign minister Radoslaw Sikorski signing what was ostensibly meant to be a compromise deal between then-President Viktor Yanukovych and the Western-supported opposition leaders amid mass street protests in Kiev. Yanukovych's government was toppled and he was forced to flee the country just a day after the deal was signed. Later, Tusk and Sikorski urged NATO and the EU to take off their "kid gloves" in relation to Russia, up to and including threatening Moscow militarily, if necessary, over its alleged role in the Ukraine crisis, and urged the alliance to send military aid to the new authorities in Kiev.

The crisis which resulted in the aftermath of the Maidan coup d'etat prompted authorities in Crimea to hold a snap referendum. The vote saw the mostly ethnic Russian peninsula break off from Ukraine and rejoin Russia in March 2014, almost exactly sixty years after Soviet leader Nikita Khrushchev had made it an administrative division of Ukraine in 1954. Amid voter turnout of well over 80 percent,  over 96 percent of Crimeans voted to support the peninsula's reunification with Russia.

Russia Back in the G7?

On Tuesday, US President Donald Trump said he would "certainly" support Russia's return to the G7 to recreate the G8. Trump reportedly voiced support for the idea based on a recommendation by French President Emmanuel Macron that Russia be invited to the summit in 2020, when the US will take over the group's presidency. Moscow has reacted cautiously to the idea. On Wednesday, the Russian Foreign Ministry said "specific proposals" would need to be made before Russia could make a formal decision on the issue. German Chancellor Angela Merkel and an official from Canada voiced opposition to Russia's return to the body.