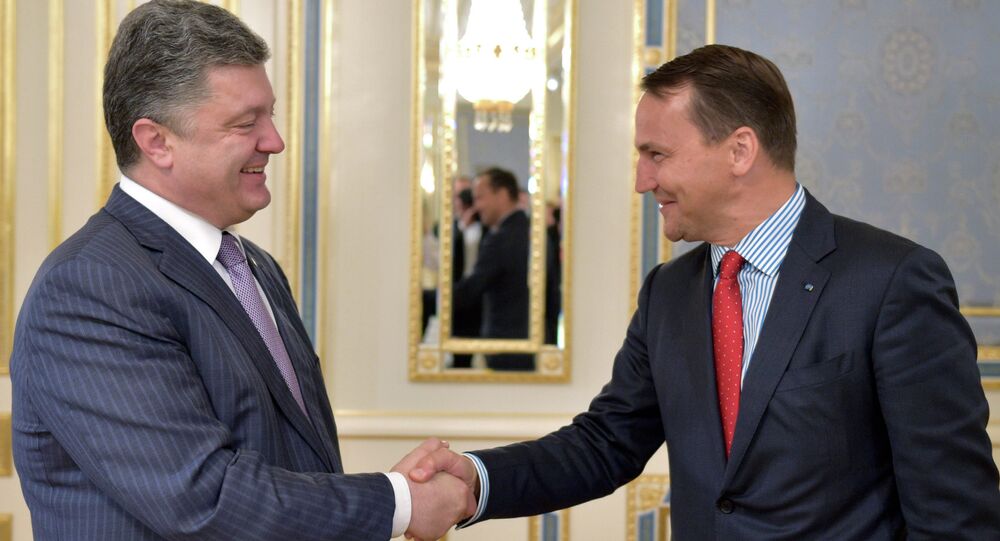 On Saturday, Polish media confirmed that former Foreign Minister Radoslaw Sikorski had joined President Poroshenko's International Advisory Council for Reforms, becoming the latest among a series of figures associated with neoconservative ideals and anti-Russian hysteria and to offer their assistance to Ukraine's leadership.

Speaking to the Polish Press Agency, Sikorski confirmed that he has been asked to join the Council, headed by fugitive Georgian ex-president and current Odessa governor Mikheil Saakashvili.

"I intend to visit Ukraine regularly, because I support the country's reform," Sikorski noted, adding that he is "delighted that Ukraine will be looking to learn from the Polish experience."

Apparently, that experience includes borderline hysterical anti-Russian rhetoric backed by neoconservative ideology. Sikorski is married to Anne Applebaum, an American-Polish journalist known for her hawkish, stridently anti-Russian attitudes, who said at the height of the Ukrainian crisis in March, 2014 that the US and its allies should not allow for the continued "existence of a corrupt Russian regime that is destabilizing Europe," later adding that Europe should prepare for "total war" with Russia.

© AP Photo / Czarek Sokolowski
Busting the Myth of Polish Sympathy for Ukraine
In his own right, Sikorski has had quite some experience pursuing a virulent anti-Russian policy line during his political career, including during his time as Poland's minister of foreign policy, when he served in the cabinet of Civic Platform Prime Minister Donald Tusk. Tusk, alongside then-Swedish Prime Minister Carl Bildt, had been obsessed with promoting the EU's Eastern Partnership initiative across six nations in the former Soviet space, including Ukraine, designed to expand the EU's sphere of influence in the region.

During his term as foreign minister, prior to the Ukrainian crisis, Sikorski signed the missile defense agreement with US Secretary of State Condoleezza Rice. The official was openly involved in the events leading up to and following the Maidan coup d'état in the winter of 2014.  On February 24, 2014, Sikorski signed his name to what was ostensibly meant to be a compromise deal between then-President Viktor Yanukovych and the Western-supported opposition leaders amid mass protests in Kiev. Yanukovych was forced to flee the country the next day.

When anti-Maidan activists began rising in Ukraine's Donbass region, Sikorski was quick to label them "terrorists," adding that NATO and the EU should take off the "kid gloves" in their dealings with Russia and its leadership, up to and including threatening Russia militarily, if necessary.

© Photo : Anatol Chomicz
The Russians are Coming! Polish Media Coverage of Events in Ukraine Drives Man to Blow Up His Home
The politician quickly came to be exalted in much of the Western press, described by Foreign Policy as a hero "fighting to get a wishy-washy continent to stand up to Russia," serving "at the center of the Ukrainian revolution since before it [even] began."

In October 2014, Sikorski found himself in the center of a scandal in his home country when he told Politico that, in a 2008 meeting between Putin and Tusk, "he (Putin) wanted us (Poland) to become participants in [a] partition of Ukraine." He was later forced to admit that "his memory had failed" him, saying that "some of my words have been over-interpreted." It turned out that not only did Putin not make the comments, but the meeting Sikorski described had never even taken place. The scandal led to intense criticism for the minister from within his own party, with opponents saying that he should resign.

Sikorski does not appear to have lost any of his exaggerated anti-Russian zealotry. A few days ago, the politician spoke at the 12th annual Yalta European Strategy forum, organized by Ukrainian oligarch Viktor Pinchuk and aimed at promoting Ukraine's membership in the European Union via high-level talks between Ukrainian and European officials.

The politician's appearance at the forum made headlines in both Poland and Ukraine, after he suggested that NATO should stockpile weapons on Poland's border with Ukraine, in case of Russian aggression. "Anti-tank weapons can be deployed somewhere close to Ukraine, in Poland or Romania. If the pro-Russian or Russian forces move deeper into the territory of Ukraine, these weapons will be supplied to Ukraine in a very fast manner, within an hour." The politician warned that "President Putin should understand this."

© AP Photo / Alik Keplicz
3 Ministers, Speaker of Parliament Resign Over Polish Wiretapping Scandal
Sikorski's appointment comes at an interesting time in his political life. At home, he has been subject to numerous scandals, from allegations about the misappropriation of public funds, to alleged drug abuse, to the use of public servants for his own private ends, including using secret service to bring pizza to his private residence.

In June, Sikorski was forced to resign from office as Speaker of Poland's parliament, a post he had held for less than nine months, amid a scandal involving leaked tapes from 2013 and 2014 where, among other things, he candidly explained that Poland's alliance with the United States was "bull****," adding bluntly that he feared that Poland would "get into a conflict with the Russians and the Germans, and we'll think that everything is super because we gave the Americans a ****job."

Losing the confidence of his party, Sikorski has said that he will not run in Poland's parliamentary election in October.