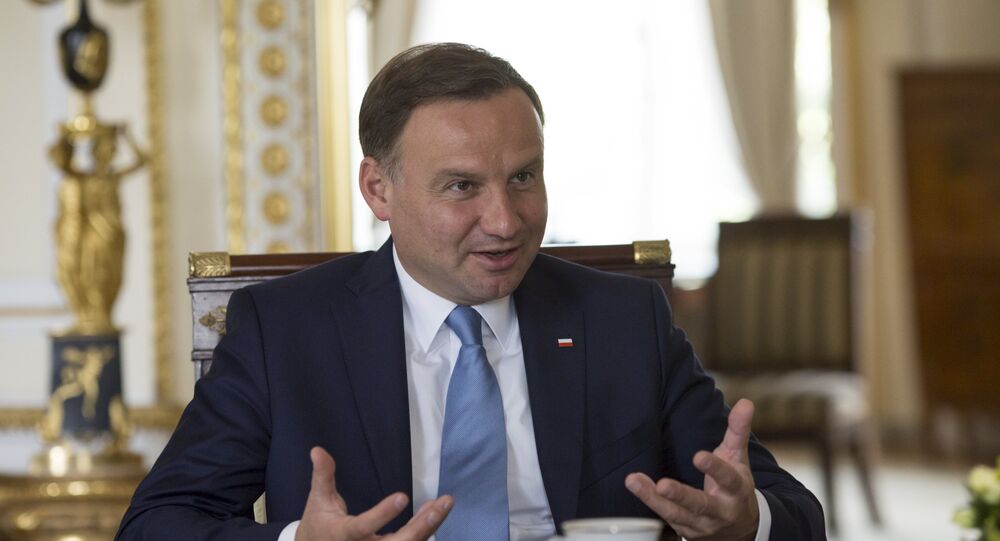 In an interview for German tabloid newspaper Bild, Polish President Andrzej Duda suggested that Europe must unite to apply new pressure on Russia to return Crimea to Ukraine. Sputnik explains why any further pressure on Russia regarding the Crimea issue will remain fruitless.

© AFP 2020 / ATTILA KISBENEDEK
Polish Foreign Minister Goes Head-to-Head With President Over Ukraine Policy
In the interview, published Wednesday, ahead of Duda's upcoming visit to Berlin on Friday, the president declared that "Europe must insist" on the return of Crimea to Ukraine, "and should not allow a peace which has lasted for decades to be broken."

Duda insisted that Russia had "violated international law," noting that "this cannot be ignored" and adding that Europe's politicians must push "to insist that the status quo is restored." The president also praised Chancellor Angela Merkel, noting that "she has taken a very tough stance in relation to Russia," and adding that he "would like to see all of Europe supporting her position. Only in this way can real, concrete results be reached…toward ending the conflict in Ukraine, and not just freezing it."

The president did not make clear exactly what means Europe might use to increase its pressure on Moscow, suggesting only that he will look to speak about it during his Berlin visit, and reiterating that his presidency will seek to ensure "a stronger NATO presence in Poland and the region."

The Crimean Issue is Closed

© Sputnik / Sergey Guneev
Crimea's Future Was Decided by Local Residents, the Issue is Closed - Putin
Over the past year, Russia's leadership has repeatedly explained that the Crimea issue, decided on by the peninsula's residents in a referendum in March 2014, is closed. Most recently, President Vladimir Putin, commenting on Ukrainian President Petro Poroshenko's remarks that he should have coordinated his visit to Crimea with Kiev, simply noted that he was "not going to make any comments on this issue, because the future of Crimea has been decided by people who live on this territory."

In March of 2014, amid the chaos following the Maidan coup d'état in Kiev, Crimea's residents overwhelmingly supported local authorities' snap proposal to secede from Ukraine and to join Russia, following a referendum in which over 96 percent of eligible voters voted to join Russia, amid voter turnout of 83 percent.

The peninsula's majority ethnic Russian residents made their decision amid threats against the status of the Russian language by the new authorities in post-Maidan Kiev, and by ultranationalist militias, who threatened to destabilize the situation and to crack down violently on pro-Russian sentiment in the area, the same way that Kiev ultimately ended up doing in the south-eastern regions of Donetsk and Lugansk.

The heavily pro-Russian sentiment on the peninsula can easily be explained, given that until 1954, Crimea was actually a subdivision of the Russian republic of the Soviet Union, before Soviet leader Nikita Khrushchev transferred it to Ukrainian republican administration, a move which lawmakers have since deemed unconstitutional.

© Sputnik / Yuriy Zaritovskiy
'Yeltsin Never Gave a Damn About Accepting Crimea Back Into Russia'
According to Yuri Meshkov, Crimea's first and only president, Ukrainian President Leonid Kravchuk was so uncertain about the legal status of Crimea in newly independent Ukraine that he was readily willing to give the peninsula back to Russia, and would have done so were it not for Russian President Boris Yeltsin's indifference on the issue. Since then, a host of political moves by Crimean lawmakers, including a 1992 initiative by the Supreme Council of Crimea declaring the autonomy's conditional independence, have made clear the extent of the peninsula's desire to rejoin Russia.

Following President Putin's decision to accept Crimea's reunification with Russia, the West accused Moscow of meddling in Ukraine's internal affairs, and introduced several rounds of economic sanctions against Moscow, while NATO expanded its presence in Eastern Europe and began a series of large-scale exercises on Russia's borders.

Why Crimea is Actually a Cover for the New Polish Leadership

In all his bluster about Russia's alleged violation of international law, President Duda seems to have forgotten Poland's instrumental role in promoting the Euromaidan scenario in Kiev, which led directly to the Crimean, and later Russian, response. It's worth remembering not only former Prime Minister Donald Tusk's key role in pushing the EU's Eastern Partnership initiative, aimed at increasing the EU's influence in Ukraine, but also evidence that some of the ultranationalist youth which would go on to play a key role in the Maidan were trained in camps in Poland. Poland's initiatives in the run-up to the events of Maidan prove that as far as Warsaw is concerned, Russia's reaction to the crisis could be seen as an unexpected, out of the blue response.

© REUTERS / Przemyslaw Wierzchowski
Polish General Says NATO a 'Paper Tiger' if it Doesn't Comply With Warsaw's Demands
Moreover, given Russian society's clear and overwhelming support for Crimea's return to Russia, it must be patently obvious to the leaders of Poland, Brussels and Washington that President Putin could not go back on his decision even if he wanted to. In this context, Duda's remarks are clearly aimed only at maintaining the status quo of Polish hostility to Russia, with the intended consequence of dragging through his agenda aimed at creating a heavy NATO presence on his country's soil.

In an interview for Polish daily newspaper Nasz Dziennik earlier this week, divisional general Roman Polko, a prominent Duda supporter, admitted that the new NATO infrastructure in Poland will be necessary "regardless of what is happening in Ukraine." The former special forces commander gave a refreshingly honest explanation of Duda's militaristic approach, stating that it is merely a continuation of the "policies of late President Lech Kaczynski," who promoted the strengthening of NATO's eastern flank long before the emergence of the crisis in Ukraine.