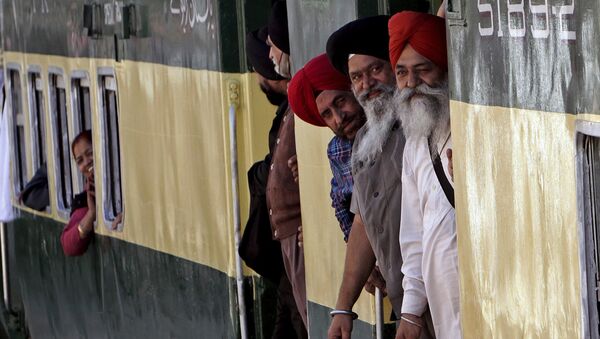 New Delhi (Sputnik) - The move to facilitate visa free travel is going ahead despite heightened tensions between India and Pakistan over New Delhi’s decision to strip Jammu and Kashmir of its special constitutional status.

Islamabad announced on 21 August that it had decided to go ahead with the visa-free corridor for Sikhs to visit one of their key pilgrim centres in the country.

"Pakistan is committed to open the corridor in November on the 550th birth anniversary of Guru Nanak," Pakistan Foreign Office Spokesperson Mohammad Faisal said on Thursday.

The corridor would link two shrines considered holy by the Sikh community - in Pakistan’s Kartarpur, the final resting place of the religion's founder Guru Nanak and Dera Baba Nanak, which is located in India’s Punjab state. Both shrines are situated only three kilometres away from each other, across the international border.

India and Pakistan announced that the Kartarpur Corridor would be completed before the 550th birth anniversary of Guru Nanak in November 2019. The construction of a passenger terminal and highways are underway on either side of the border.

The Chief Minister of India’s northern state of Punjab Amarinder Singh recently expressed concern over reports of a slowdown of work on the project. He also urged Pakistan to uphold its commitment to the construction saying that failure to do so would hurt the religious sentiments of the Sikh community.

Tension has been simmering between the two-nuclear neigbours over India’s decision to strip Jammu and Kashmir of its special status. Pakistan has downgraded its diplomatic ties with India, suspended trade and halted communication links, while mounting a diplomatic offensive against New Delhi.