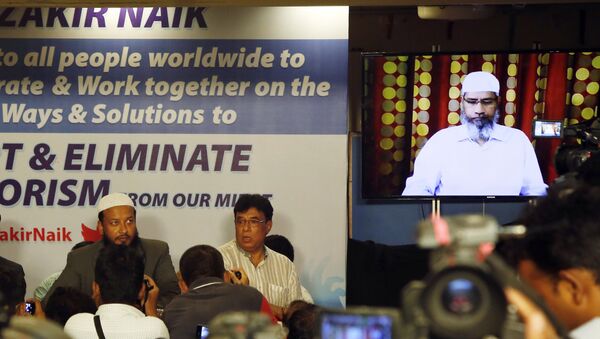 Malaysia gave permanent residency to Naik, but his recent hate speeches against Hindus and Chinese nationals in that country, have irked the government of Mahathir Mohamad, which is considering action against the preacher, including deportation.

The move to ban Naik from giving speeches follows his interrogation by police authorities on his hate speeches, reports India Today.

​Naik, however, denied the allegations and claimed his speeches were misunderstood. Earlier two ministers had also told the PM that Zakir Naik should no longer be allowed to remain in Malaysia.

Zakir Naik is the founder and president of the Islamic Research Foundation and a very popular televangelist in several Islamic countries. He was a trained physician before switching over to religious preaching. Naik’s radical speeches are banned in India, Bangladesh, Canada, and the United Kingdom.

Investigations into a terror attack in Dhaka, the capital of Bangladesh, in July 2016 revealed that the terrorists involved in the brutal killings were influenced by Zakir Naik. The Bangladeshi government subsequently banned his TV channel Peace, because it was not “consistent with Muslim society, the Quran, Sunnah, Hadith, Bangladesh’s Constitution, our culture, customs. and rituals”.

India’s counterterrorism agency, the National Investigation Agency also found his influence on terrorists arrested from Hyderabad and had filed a formal complaint against him and his Mumbai-based organisation, accusing him of indulging in unlawful activities and promoting religious hatred.

New Delhi has made a formal request to Malaysia for the extradition of Zakir Naik, wanted in in connection with his role in a terrorist attack in Bangladesh and cases of money laundering and hate speech.