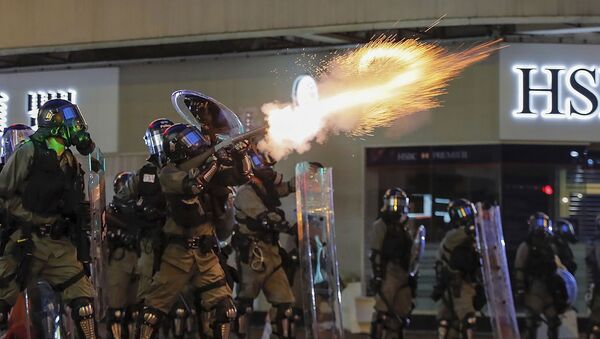 © AP Photo / Kin Cheung
Subscribe
In comments Thursday, US President Donald Trump said he hopes the protests in Hong Kong don't end in violence and that the trade war between the US and China will be short.

During comments to the press on the tarmac in Morristown, New Jersey, Trump gave reporters some of his thoughts on Chinese events.

The US president said he doesn't expect the trade war with China to go on very long and that he believes the socialist country wants to strike a deal. However, he also predicted China would fail to retaliate to further tariff hikes by the US, like those implemented earlier this month.

Regarding the spiraling situation in the semi-autonomous Chinese city of Hong Kong, where violent protests have increased in recent weeks, Trump said he was "very concerned," hoping it doesn't end in a crackdown, and that it might be a good idea for Chinese President Xi Jinping to meet with protest leaders. "I know it's not the kind of thing he does," the president noted. Trump said he hopes China will humanely solve the "problem" and that they'll do so quickly.

He said the talks on trade scheduled with China next month are still on and that he and Xi would be speaking on the phone "soon."

Trump also noted that the "great" trade deal between the US and United Kingdom, aimed at establishing a post-Brexit relationship after October, was "moving along rapidly."

The former real estate mogul also touched on the question of gun violence, saying that "the gun doesn't pull the trigger. They pull the trigger." He called for more institutions for mentally ill people and said he supports strong, meaningful background checks for gun purchases.