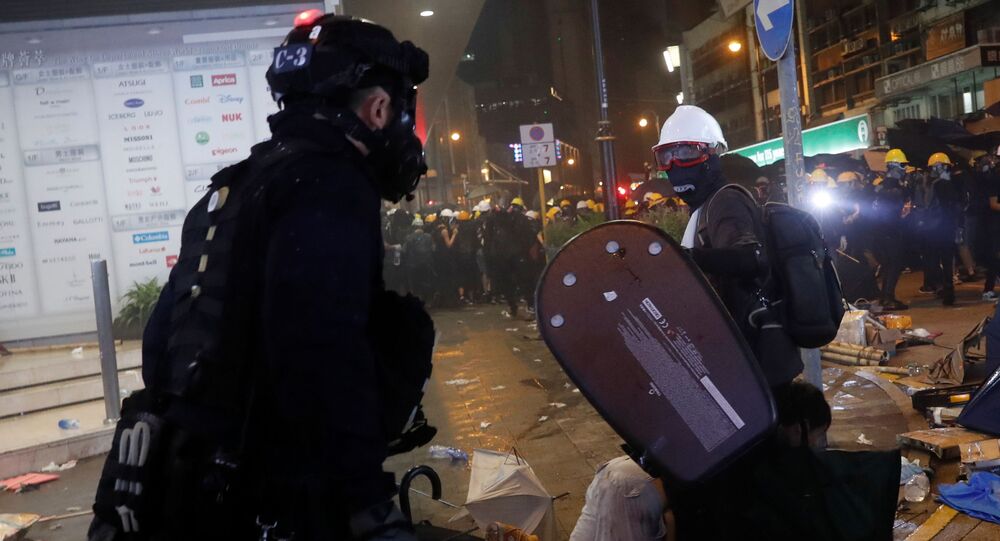 Jude Woodward, author of the book “The US vs China: Asia's New Cold War?” told Radio Sputnik’s Loud & Clear Wednesday that although anti-Chinese protests in Hong Kong appear, at face value, to be about the bill that would have allowed extradition to mainland China, they have more to do with Hong Kong’s desire to demonstrate its independence.

Clashes between demonstrators and police broke out in the urban area of Kowloon in Hong Kong Wednesday, just a couple days after anti-Beijing protesters stormed the Hong Kong International Airport on Monday, causing the airport to cancel all flights in and out of the city until all of the protesters left the airport.

Mass protests erupted in Hong Kong in early June when authorities announced they were considering making amendments to a bill that would allow the semi-autonomous Chinese city to extradite suspects to jurisdictions with which it did not have an extradition agreement, including mainland China. While Hong Kong Chief Executive Carrie Lam announced in July that the bill was “dead,” the protests have continued, diffusing into a generalized anti-China sentiment.

“I think it is complicated, and I don’t think they’re about one single thing,” Woodward told hosts John Kiriakou and Brian Becker about the protests. “Certainly, they were triggered by mishandled piece of legislation by Carrie Lam, the head of Hong Kong … that’s the type of agreement that Hong Kong has many countries and China has with many, many countries, but didn’t have with Hong Kong itself, even though Hong Kong was formerly part of China.”

Hong Kong was a colony of the British empire from 1841 to 1997, when it became a special administrative region of the People’s Republic of China.

“There was [resentment] triggered by this legislation, because it was claimed it would be used to extradite political opponents of the regime in mainland China. This is actually not the case, because the kind of crimes that were covered by the legislation were limited and didn’t include political crimes. That’s what triggered protests, but clearly there were underlying grievances or concerns which were driving some of this,” Woodward explained.

In his usual fashion, US President Donald Trump on Tuesday tweeted, “Many are blaming me, and the United States, for the problems going on in Hong Kong. I can’t imagine why?”

​The tweet comes as Beijing has accused Washington of inciting the protests in Hong Kong in an effort to undermine the Chinese government, and tensions between the US and China continue to rise amid an ongoing trade war. According to a report by the Wall Street Journal, images of Julie Eadeh, the political unit chief of the US Consulate General in Hong Kong, meeting with key figures of the protests emerged in Beijing-backed media outlets last week.

“I would say that [Trump’s tweet] was very much poking China. The phrase ‘I can’t imagine why,’ is generally used ironically, with the implication that it is completely obvious why. So, it is obvious why such claims are made - because the US has a hand in stirring this up. It’s been meeting with protesters. Some of the leaders of this protest were involved in a previous protest a couple of years ago called the Umbrella Movement, and they were invited to meet members of Congress, [former Secretary of State] Hillary Clinton, etc. at the time. There is no question that the US has had a hand in this, as indeed has Britain, which has also been encouraging and stirring up the protesters in various ways,” Woodward explained.

“It’s ironic that these young people [protesters] are holding up the previous Hong Kong colonial flag, the US flag and the union flag of Britain when Britain obviously was the colonial occupier,” Woodward said of the protesters. “These young people … they have some complete illusion as to what the US and Britain represent … which is fed by the media and by social media … directly by the US and Britain in particular.”