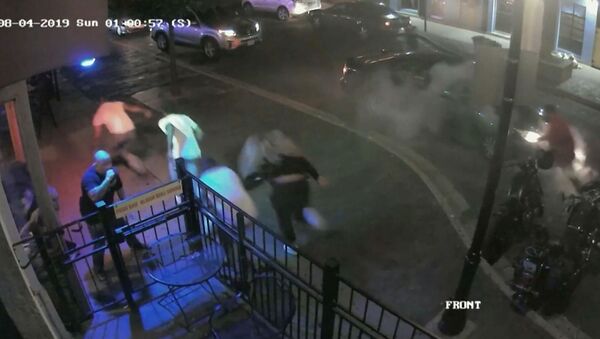 © REUTERS / Dayton Police Department
Subscribe
Authorities on Tuesday released a timeline of the events that took place before 24-year-old gunman Connor Betts killed nine people, including his sister, and wounded at least 27 others in Dayton, Ohio, on August 4.

According to the Dayton Police Department, Betts, his sister Megan and an unidentified companion arrived at the Oregon District in downtown Dayton at around 11:04 p.m. on August 3, parking their car behind Thai 9 restaurant. The three of them then went to Blind Bob’s, a live music venue. At around 12:14 a.m., the shooter left Blind Bob’s and went to a bar called Ned Peppers, spending around 30 minutes inside the venue. He was also at Ned Peppers the night before the shooting, according to authorities.

He then left Ned Peppers and walked back to his car at around 12:44 a.m. He stayed by his vehicle for around eight minutes, where he spent that time looking at objects inside his trunk, getting a backpack ready and changing into a dark hoodie. Carrying the backpack, he then walked toward Blind Bob’s through a back alley. He stopped in the alley for around nine minutes, where he was presumably getting his weapon prepared for the massacre.

Connor Betts then began shooting people at around 1:05 a.m. at a taco stand near Blind Bob’s, according to police. Betts’ sister was one of the first three people killed. The gunman then continued running down Oregon District’s Fifth Street while shooting people.

Video footage taken outside Ned Peppers and released by authorities last week shows people fleeing for their lives outside the bar, as officers engage the shooter and open fire on him before he is able to get inside.

“Had this individual made it through the doorway of Ned Peppers with that level of weaponry, there would have been catastrophic injuries and a loss of life,” Dayton Police Chief Richard Biehl said during the press conference, noting that officials within the department are unsure whether or not Betts meant to kill his sister.

In addition, Biehl confirmed that Betts had drug paraphernalia on him during the shooting and had received mental health treatment in his lifetime, although authorities are not aware of any diagnosis. Police also noted that they were able to follow Betts as he ran through Oregon District due to his distinctive hoodie, which had the words “STUPIDLY BRUTAL DEATH GRIND” sprawled on it.

US federal police released a statement Monday claiming that Betts’ friend, Ethan Kollie, had bought him body armor, an upper receiver for an assault rifle (which is part of the gun’s frame) and a 100-round double drum magazine earlier that year. All of the items were used in the attack.

Kollie reportedly admitted to lying on federal firearms forms about his drug use, telling authorities that he does in fact regularly use marijuana and psychedelic mushrooms. However, he claims that he was not aware Betts was planning to carry out the attack.