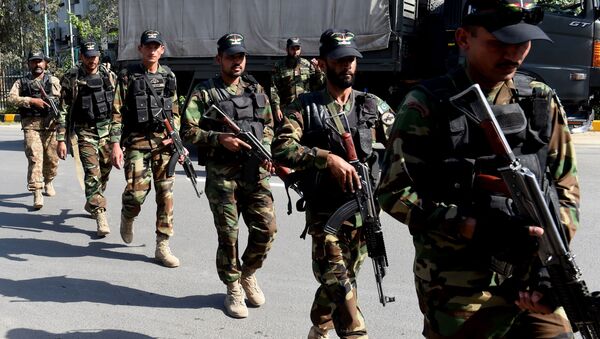 © AFP 2021 / ARIF ALI
Subscribe
New Delhi (Sputnik): Indian and Pakistani armies recently exchanged heavy fire across the border over several days, leaving at least four dead on the Pakistani side and one on the Indian side while nearly 40 others were wounded. Most recently, the revocation of Kashmir's special status has intensified India-Pakistan tensions.

Playing down the movement of military equipment by Pakistan near the Line of Control as nothing but "precautionary", Indian Army Chief General Bipin Rawat said the Indian armed forces nevertheless are well-prepared to counter any actions by Pakistan.

The Line of Control (LoC) is the de facto border between India and Pakistan.

"Everybody does a precautionary deployment, and we should not get too concerned about it. As far as the Army and other services are concerned, we always have to be prepared," General Rawat told media on Tuesday.

The statement came on the backdrop of a media report stating that the Pakistani military has begun moving military equipment to the country's Skardu Air Base near the Union Territory of Ladakh on the Indian-Pakistan border.

Meanwhile, Pakistan's ambassador to the US Asad Majeed Khan, in an interview to the New York Times, said that Pakistan might redeploy troops from the Afghanistan border to the Kashmir frontier after the recent decision to repeal Article 370, of the Indian Constitution which granted special status to Jammu and Kashmir.

On whether the hostilities along the border with Pakistan will escalate in the days to come, General Rawat said the choice is with Pakistan.

"If the adversary wants to activate the LoC, the choice is his," the Army chief said.

The Indian Army and air force have been put on high alert along the Pakistan border for last few months to retaliate to any Pakistani misadventure effectively.

On Monday, while visiting a border post near the LoC, Pakistan's Chief of Army Staff General Qamar Javed Bajwa said Islamabad had initiated multiple steps to redress the ongoing crisis in Kashmir, adding that Pakistan's Army will not allow India to hide the alleged crimes committed by its troops in Kashmir.

The region has been a bone of contention between India and Pakistan since the countries gained independence from British colonial rule in 1947. Both nations govern different parts of the region but claim it in its entirety. The rivals have also fought two wars over Kashmir.