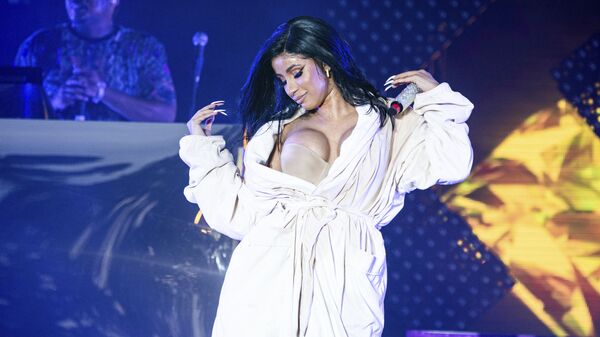 The hit rapper has already presented her plan on how to make America better and endorsed one of the Democratic presidential candidates, Bernie Sanders. Now she has revealed her ideas regarding safety in water by posting a picture in a see-through top, showcasing her assets, with a sarcastic caption.

US rapper diva Cardi B has put aside her political activism and work on making hits to tease fans with an NSFW post on Instagram. The Bodak Yellow maker shared a picture of herself wearing crazy pink pants, sneakers and a see-through black top with tiny triangles covering her nipples, which probably saved her from social media censorship.

“I can’t swim so I bought these t*tties so I can float”, she jokingly wrote in the caption.

I can’t swim so I bought these titties so I can float.

There was no shortage of admiring commenters. Even fellow celebrities checked in.

“Your [sic] a genius”, DJ Diplo posted, while Naomi Campbell shot back, noting “I know the feeling can’t float”.

US blogger and social media star Chris Crocker paid tribute to the rapper with a comment that read “A Libra Goddess”.

Cardi B is often quite mouthy with fans on social media, sharing virtually everything with her followers, ranging from cold ketchup or pancake syrup to speaking up about taxes or certain political figures.

Recently, she voiced her support for 2020 Democratic presidential candidate Bernie Sanders after she discovered his 2016 political agenda. Although the rap diva didn't directly say that she would cast her vote for Sanders, she said that the voters had "let him down in 2016" when he lost the Democratic nomination to Hillary Clinton.