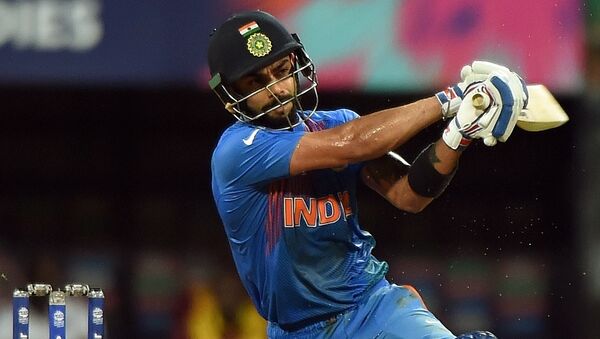 New Delhi (Sputnik): Known for breaking records after records on the field, the lively Indian cricket skipper Virat Kohli wowed his fans once again on Friday by breaking into an impromptu dance on the ground after India versus West Indies match was briefly stalled due to rain.

After winning the toss in today’s one-day match against the West Indies only 13 overs could be bowled at the Providence Stadium in Guyana, a country on the North Atlantic coast of South America, before the match was interrupted.

However, the downpour couldn’t dampen the spirits of fun-loving Kohli, who gave a moment to savour his fans from the playground itself.

Kohli, known for having a personality, was caught on camera getting into the groove while others awaited the match’s resumption. He was shaking it to the dance numbers that sounded for the spectators at the stadium.

While showing off his dancing skills to the team, he taught West Indian master-blaster Chris Gayle a few moves, and he also seemed to be enjoying the moment too.

When in the Caribbean, breaking into a jig be like 🥁🥁🕺 #TeamIndia #WIvIND pic.twitter.com/teg6r2WilS

The fans, as usual, were in awe of the buoyant Indian skipper.

Virat dancing during the interuption
Of rain . In a funnuy mood near gale
Fantastic najara h.

When your passion is your work life is ❤️❤️❤️❤️

Nice to see players having a cordial relationship between the opponents and use the idle time to practice dance moves. #TeamIndia #Meninblue #INDvWI @imVkohli @henrygayle #WestIndies #MenInMaroon

Kohli and Gayle, who share a cordial bond, were also spotted dancing at an earlier event.

Watch this dance by WEST INDIES Chris Gayle and Our Own Virat Kohli on famous hariyanvi track " Teri aankhon ka ye kajal".
Give your votes - who is better amongst two? #FridayFeeling @henrygayle @imVkohli #chrisgayle pic.twitter.com/TZtah87lhw

After a brief delay, the match resumed, but the unrelenting rain stalled the game once more. The match was finally called off by umpires.

Recently Virat Kohli praised Portuguese football star Cristiano Ronaldo, describing him as an "inspiration". He also admitted that he roots for any club for which Ronaldo plays.

The second ODI between India and the West Indies will be played in Port of Spain on 11 August.