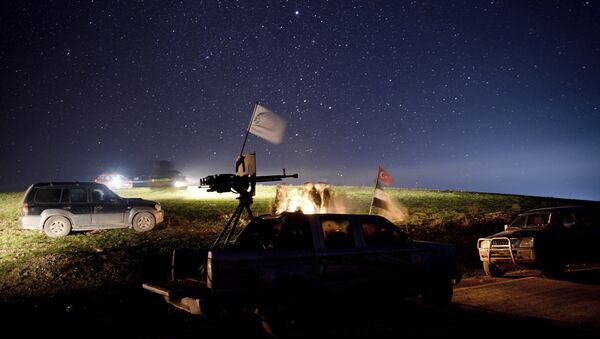 US President Donald Trump has promised to withdraw US troops from areas of Kurdish-controlled northern Syria where a Turkish operation will be taking place, Turkish Foreign Minister Mevlut Cavusoglu has announced.

"In a telephone call with our president, the US president informed us that the US would be vacating the area. We will discuss the question of coordination after the withdrawal takes place. The agreement with the US on the creation of a safe zone is a very important first step," Cavusoglu said, speaking at a press briefing on Thursday.

The foreign minister added that Turkey would not allow the US to delay the implementation of a safe zone under any circumstances, and has shown Washington that it is prepared to back its words by deeds. "Either we do it together, or we will be able to do it ourselves," he said.

"Our decision is to create a safe zone so that there are no terrorists there from the Syrian Kurdish self-defence forces and the Kurdistan Workers Party. But we will not allow this agreement to be turned into the [US] Roadmap for Manbij," Cavusoglu noted, referring to the Turkish-US security agreement negotiated last year.

Earlier, the Turkish Defence Ministry announced that Ankara and Washington had agreed to establish a coordination centre for joint operations, and to a security 'safe zone' in northern Syria in which an area of Syrian territory between 30 and 40 km wide would be controlled by Turkey in coordination with the United States, with Syrian Kurdish forces forced to leave the area and surrender their heavy weapons.

Syrian authorities rejected the agreement, calling it a "dangerous" violation of Syria's sovereignty, and lamenting that "Syria's Kurds, who have accepted to become a tool in this aggressive US-Turkish project, bear a historical responsibility in this regard."

Damascus called on the international community to condemn this example of "flagrant aggression" by Turkey and the United States. 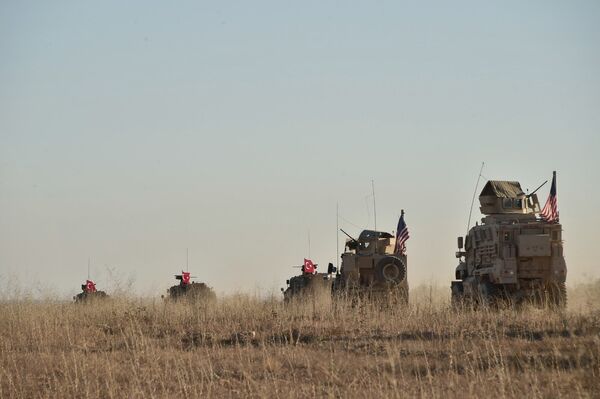 Nov. 1, 2018, Turkish and U.S. troops conduct joint patrols around the Syrian town of Manbij, as part of an agreement that aimed to ease tensions between the two NATO allies
© AP Photo / Turkish Defence Ministry

The US military established a presence in northern and northeastern Syria during the war with the Daesh (ISIS)* terrorist group, joining local, predominantly Kurdish militias in driving the terrorists out of these territories and helping them to establish self-governance autonomously from Damascus.

Turkey has launched several military operations against Kurdish militia units in Syria along the Turkish border, classifying them as 'terrorists' and accusing them of maintaining ties to the Kurdistan Workers Party, a Turkey-based Kurdish organisation which Ankara also considers as 'terrorists', and with whom Turkish security forces have clashed repeatedly in Turkey itself in recent years. 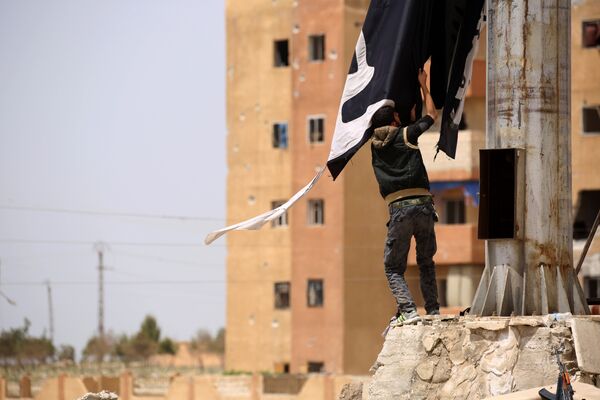 A member of the US-backed Syrian Democratic Forces (SDF), made up of an alliance of Arab and Kurdish fighters, removes an Islamic State group flag in the town of Tabqa, about 55 kilometres (35 miles) west of Raqa city, on April 30, 2017, as they advance in their battle for the group's de facto capital
© AFP 2021 / DELIL SOULEIMAN

Earlier this year, a senior commander from the Syrian Democratic Forces alliance governing northern and eastern Syria said he felt a deal between Damascus and Syria's Kurds on autonomy for the country's north was "inevitable." However, in February, Bouthaina Shaaban, an advisor to Syrian President Bashar Assad, said the kind of autonomy the Kurds were asking for was impossible, since the country is a multiethnic and multireligious "melting pot," with all citizens "equal before Syrian law and the Syrian constitution."

US President Donald Trump began talking about the idea of withdrawing the estimated US 2,000 troops in Syria late last year, citing the defeat of Daesh and his lack of interest in remaining entangled in "endless" Middle Eastern wars, but has since waivered over the idea.

000000
Popular comments
The US is obediently taking orders from Turkey.

Vladimir Grindenko
8 August 2019, 15:30 GMT9
000000
So, the US screws the Kurds again. When will Kurdish leadership learn that the US and their NATO allies are not their friends.