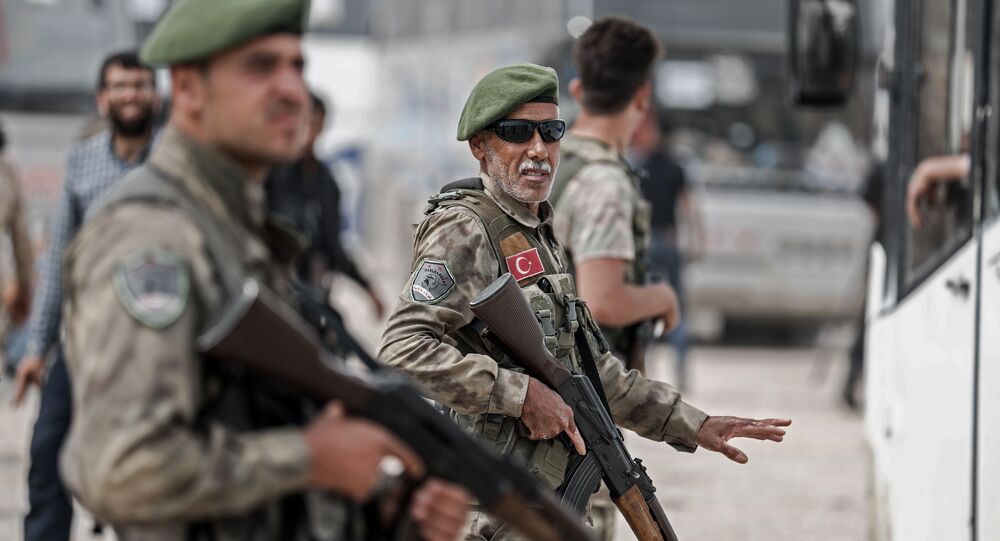 Previously, Turkey conducted two ops, "Olive Branch" and " Euphrates Shield" in the Arab Republic in a bid to eliminate Kurdish forces there, allegedly tied to the Kurdistan Workers' Party (PKK), deemed a terrorist organisation by Ankara.

Turkish Defence Minister Hulusi Akar has announced that the country is "intensely" preparing to launch another operation against Syrian Kurds, which will take place in Manbij, Aleppo Governorate, and to the east of the Euphrates, Turkish Anadolu Agency reported.

"[Kurds are] digging some trenches and tunnels in Manbij and east of the Euphrates. Whatever they dig, trenches or tunnels […] when the time comes they will be buried in the trenches that they dig. Of this there should be no doubt", he said.

Akar's words come following the US announcing on 19 December about the withdrawal of its troops from Syria, where they supported Kurdish groups, such as the Syrian Democratic Forces (SDF). Overall some 2,000 US soldiers will be returning home within 100 days after US President Donald Trump announced the defeat of Daesh* forces in the Arab Republic.

Prior to this, Turkish President Recep Tayyip Erdogan announced that a "counter-terrorist operation" east of the Euphrates could begin "at any moment", vowing to prevent the creation of a "terror corridor" along the Turkish border.

Turkey has already conducted two operations on Syrian soil without Damascus' consent — "Olive Branch" in Afrin District and "Euphrates Shield" in northern Aleppo Governorate, aiming to push out Kurds from northern Syria and create a buffer between them and Turkish border. As a result of these two operations, Turkey and Syrian militant groups clashed with Kurdish YPG, Free Syrian Army, and SDF forces, claiming some of their territories in Syria.

Turkey accuses Syrian Kurds of conducting terrorist activities along with the Kurdistan Workers' Party (PKK). Ankara is also battling Kurdish forces on Iraqi territory by conducting airstrikes on their positions without Baghdad's permission. The latter condemned the latest Turkish airstrikes that took place on 14 and 15 December and reportedly led to a "loss of life and property". Ankara in turn responded that it will utilise its "legitimate right to self-defence" and continue conducting airstrikes against Kurdistan Workers' Party (PKK) targets in Iraq.

Turkey has been fighting the PKK since the 1980s, when the group first demanded autonomy for Kurdish-populated territories. Ankara and the PKK reached a ceasefire in 2013 to fight the threat of Daesh*, but it was terminated in 2015, when the PKK accused Ankara of bombing its positions in Iraq, along with those of Daesh*.

Turkey, Russia to Play Stronger Roles In Syria After US Troops Pullout - SNC