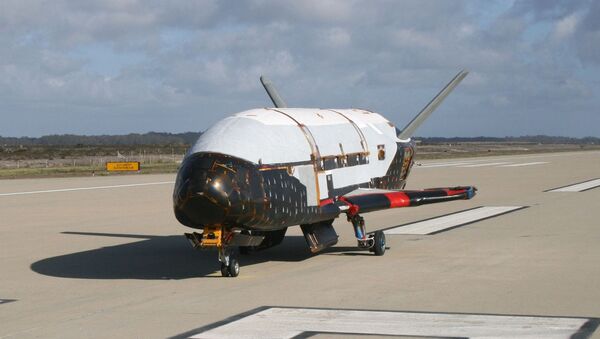 The US Air Force’s X-37B military space plane, otherwise known as the Orbital Test Vehicle (OTV), has been zipping around Earth for 700 days, and yet the Air Force remains mum about what the mysterious aircraft is up to.

The space plane is on its fifth flight, OTV-5, of the program and is nearing its spaceflight duration record. The OTV-4 leg of the mission, which concluded in May 2017, currently holds the record at 718 days in orbit.

When the X-37B took off in September 2017 atop a SpaceX Falcon 9 rocket, the only payload that the US Air Force revealed was the Advanced Structurally Embedded Thermal Spreader, developed by the US Air Force Research Laboratory to test experimental electronics and oscillating heat pipes. However, the Air Force has largely avoided revealing specific details about the X-37B program, vaguely stating that the reusable robotic spacecraft is mostly intended to test reusable space technologies.

“The fifth OTV mission continues to advance the X-37B’s performance and flexibility as a space technology demonstrator and host platform for experimental payloads,” the service explains. “This mission carries small satellite ride shares and will demonstrate greater opportunities for rapid space access and on-orbit testing of emerging space technologies.”

According to the Secure World Foundation, which describes itself as “dedicated to the secure and sustainable use of space for the benefit of Earth and all its peoples,” the spacecraft’s payload could be involved in intelligence-gathering, which may explain why the US military has been secretive about the mission. In fact, some speculate the plane’s link to Schriever Air Force Base in Colorado, which is known for collecting intelligence on space objects, is evidence that the plane is collecting such data. In partnership with the Air Force Rapid Capabilities Office, the Colorado base's 3rd Space Experimentation Squadron oversees all operations carried out by X-37B.

The Air Force has at least two X-37B vehicles, both manufactured by American aerospace company Boeing.