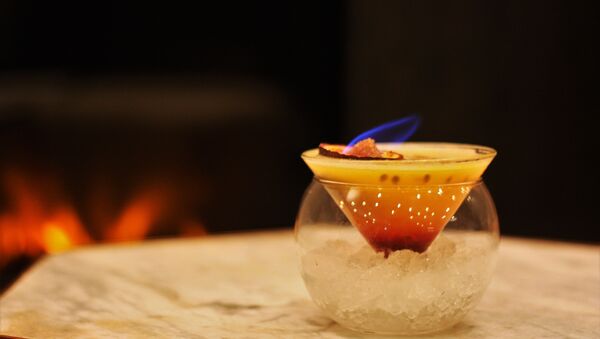 The Chernobyl nuclear disaster of 1986, recently popularised by a well-received HBO series, led to hundreds of radiation-related deaths and dreadful long-term consequences for the environment, leaving a 1,000 square mile stretch of Ukraine uninhabitable for decades to come.

The Chernobyl Spirit Company with Ukrainian and British scientists on board, has come up with a new type of "artisan vodka" with the brand name Atomik, the BBC reports.

The only bottle of Atomik that currently exists was made from rye grain that was planted in the Chernobyl exclusion zone by a group of scientists who tried to study the recovery of the land following the nuclear accident in 1986.

"This is no more radioactive than any other vodka," said Professor James Smith, a leading environmentalist from the University of Portsmouth who has been doing work within the exclusion zone for years. "Any chemist will tell you, when you distil something, impurities stay in the waste product,” he added.

He said that the vodka was checked for radioactivity in a laboratory in Southampton University – and that no contamination was detected.

The experiment showed that contaminated land can be used in a productive way over time, and the vodka could also profit local communities, Professor Smith believes.

Atomik will probably gain a certain notoriety among adventure seekers, with visits to the exclusion zone booming in recent months, but social media reactions to the new product have been decidedly mixed.

“Not sure I am brave enough” commented one person on Twitter, while others believed that the new vodka was “definitely worth a try.”  Scottish brand “Skotka Vodka” even suggested trying “nuclear daiquiri.”

Chernobyl Vodka ‘Atomik’ made in the exclusion zone definitely worth a try. #ChernobylHBO surely made the place FAMOUS. pic.twitter.com/4vwPiFRi9m

A vodka twist on a nuclear daiquiri, anyone?https://t.co/xAFEiq6At2

The Chernobyl disaster was an accident in a nuclear power plant near the city of Pripyat, Ukraine in 1986, which destroyed one of nuclear reactors and immediately killed several people. Acute Radiation Syndrome (ARS) then caused hundreds of deaths in the weeks after the accident. While free access to the Chernobyl exclusion zone around the power plant is still restricted due to the high level of radioactive contamination, the area has recently enjoyed a boom in tourism following the success of the “Chernobyl” HBO series.