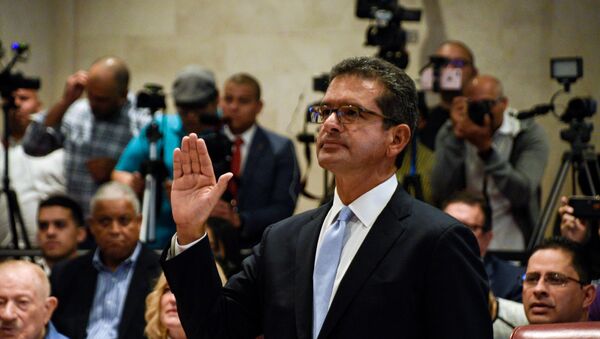 Pierluisi was sworn in as governor by Judge Luisa Colón at 5 p.m. Friday.

Pierluisi was named as acting secretary of state earlier this week by Rosselló, who promised to resign at 5 p.m. Friday.

​In his statement, Rosselló noted that Pierluisi does not require confirmation from both houses of Puerto Rico's legislature because the secretary of state is next in line to be governor.

In a news conference Friday, Pierluisi announced that the Senate must confirm whether he can keep his current role as governor. If not, Puerto Rican Justice Secretary Wanda Vazquez will assume the role of governor instead. Pierluisi also noted that people should be allowed to express themselves and that Rosselló resigned because of his behavior in the chat group. He also promised not to behave like Rosselló, promising to be more "responsive" and "transparent" to the Puerto Rican people and ensure that bringing in federal aid into the island remain a "big priority."

Rosselló resigned after hundreds of the governor’s messages while communicating with his associates were made public. The chats revealed hateful, homophobic and misogynistic comments against Rosselló’s opponents, journalists and even victims of Hurricane Maria. Meanwhile, the island saw the largest demonstrations in its history in the last few weeks.

Thousands of people rallied in the streets of San Juan, chanting: “Ricky renuncia y llévate a la junta” or “Ricky, resign and take the board with you.” The junta refers to the unelected Fiscal Oversight Management Board established by the US Congress under the watch of then-US President Barack Obama in 2016 to restructure Puerto Rico’s $72 billion debt. The board’s budget cuts have led to public school closures and a faltering healthcare system on the island.