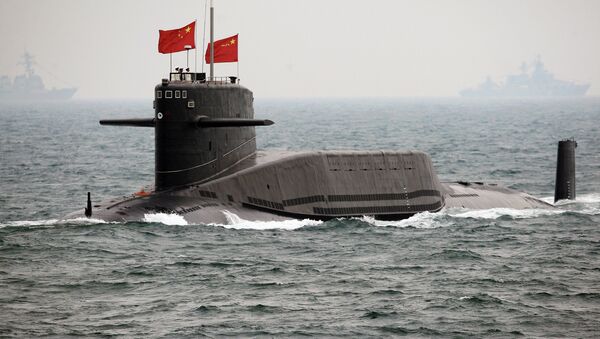 © AP Photo / Guang Niu
Subscribe
A couple of months ago, the Pentagon said that it was worried China was pursuing a so-called nuclear “triad”, meaning it would join three nations – the US, Russia, and India – that are capable of delivering a nuclear weapon by land, air, and sea.

Deputy Commander of the US Strategic Command (Stratcom), Vice Admiral David Kriete, has voiced concern over China’s rapidly expanding nuclear arsenal and its activities in the South China Sea.

"China is and has been for the last couple of decades on a very clear trajectory where they're increasing the numbers of nuclear weapons that they field, they're increasing the number of and diversity of the delivery systems. They are working on fielding a triad—ballistic missile submarines, strategic bombers, and land-based intercontinental ballistic missiles", Kriete said during a Thursday press briefing.

The admiral continued by saying that China’s nuclear build-up should be considered within the context of what he described as the country’s regional and global expansion.

"China's leadership has made it clear in recent years that they have goals of becoming a regional power and exerting—economic and military—over the western Pacific at some point in the future and then obtaining some level of global influence at some point after that”.

Kriete stressed that the United States does not seek a war with China or any other country, but, at the same time, must be prepared for one.

While the US has repeatedly expressed concerns over China’s growing nuclear arsenal, Beijing has recently reaffirmed its “no first use” policy, meaning that the Asian country will never be the first in a conflict to use weapons of mass destruction. Notably, the United States does not have a no-first-use policy.

The Trump administration has consistently said that it is seeking to include China in a trilateral arms control regime along with Russia and the US, but Beijing has rejected the idea, even though it advocates the complete prohibition and the thorough destruction of nuclear weapons.