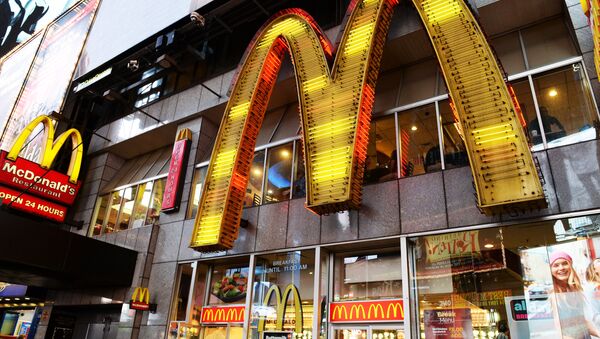 Authorities in Rome are struggling with a massive influx of tourists who, although bringing a substantial amount of cash, pose a threat to the preservation of historical sites and of the public order, which has led to the adoption of a number of new restrictive measures.

US fast food chain McDonald’s, formerly a popular spot, has now seen their permission to build restaurants in the vicinity of the Caracalla baths, a prominent historic site in Italy’s capital, revoked, CNN reported Wednesday.

"Already expressed my opposition to a fast food in the archaeological area of Caracalla Terme," Italy’s Culture Minister Alberto Bonisoli wrote on Facebook. "I inform you that the cultural ministry revoked authorization."

The move was welcomed by the mayor of Rome, Virginia Raggi.

"We go forward with the culture minister to stop fast food construction in the archaeological area of the Baths of Caracalla," she wrote on Twitter. "The wonders of Rome must be protected."

​The baths, which date from the 3rd century AD, are located near the Colosseum and other famous sites of Rome. Caracalla was a Roman Emperor who first ruled with his father from 198 to 211 AD and then alone until he was assassinated in 217.

There are almost 580 McDonald’s restaurants across Italy, the fourth-highest number in the EU, after Germany, France and the UK. Forty of those golden arches are located in Rome, which has increasingly struggled with an enormous influx of tourists in recent years, according to CNN Travel.

As a result, authorities in Rome have been forced to adopt a number of measures aimed at restraining not only tourists, but also those who seek to make an easy profit off of tourists. Newly-introduced legislation prohibits bars from selling alcohol between 2 am and 7 am, while anyone caught with alcohol in public with an open container after 10 pm is subject to fine. Other legislation forbids locals from dressing up and posing as a Roman centurion for paid photos with tourists. Those caught performing this charming scam are subject to a hefty €450 fine.