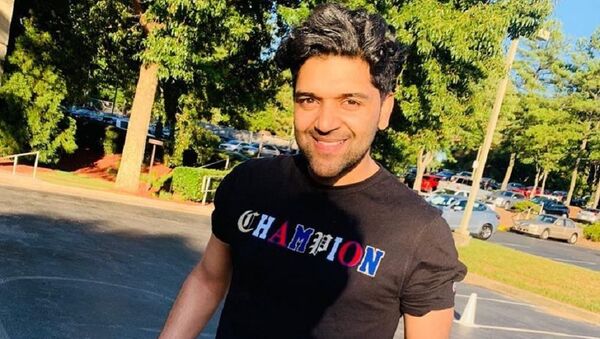 A bruised Guru Randhawa announced his return to India via a lengthy Instagram post, stating that he "is home now, feeling safe" but with four stitches on his forehead, the result of being attacked by a member of the audience at his concert in Vancouver.

He also posted a photograph of himself.

Guru is back in India with four stitches on his right eyebrow and mega successful USA/Canada tour. The incident happened on 28th July in Vancouver when Guru told one punjabi man not to come on stage while he was performing for the audience. That man was trying to come on stage again and again and then he started fighting with everyone backstage. He was known to the local promoter Surinder Sanghera who sent him away during the show. But at the end when Guru finished the show and was leaving the stage, that punjabi man came and hit him hard on his face with a punch , because of which Guru started bleeding on the spot from his forehead above eyebrow and went back to stage and showed it to the audience. That man was with few others and whosoever tried to stopped them, they were punching them and then they all ran away. Guru is home now feeling safe in India. And Guru Said , his Guru Nanak Dev ji has saved him and prayed to Waheguru to give that man a good sense of understanding what to do and what not to. Your love and support is all we need always. Thanks Management Guru Randhawa

Television news channel NDTV quoted Guru Randhawa as saying he was attacked by a Punjabi whom he was preventing from climbing onto the stage during his performance.

According to Guru Randhawa, the attacker was known to local promoter Surinder Sanghera. He said the person was repeatedly trying to get on stage but Sanghera sent him away.

After the concert, as Guru Randhawa was leaving the stage, the attacker punched him in the face. The singer started bleeding profusely from his forehead above his eyebrow but managed to get on stage and reveal his injuries to the stunned fans.

The alleged attacker could not be identified, as he fled the scene.

Fans of the popular singer took to social media to express their anguish over the assault and wished him a speedy recovery.

How can he do this with @GuruOfficial
Where is this sense of theirs?
If you buy tickets, will you do anything
Get well soon Hero #GuruRandhawa
You are a Rockstar Take some rest....
We are always with you

Superstar are not rude or have attitude..They have to be just a bit careful sometimes in there life otherwise such incidents happen..
I hope #GuruRandhawa to #GetWellSoon
Superstar get too much love from us they're super sweet from there inner side..@gurnan_147 @guruofficial https://t.co/v96DyW83Pq

This made me cry all day and all night looking at him like this ❤🙏love you bro stay strong bro always here for you #GuruRandhawaGetWellSoon #GuruRandhawa 😢❤🙏I'm still upset about my big brother https://t.co/JOP4ywWXZx

​Guru Randhawa's team has confirmed he will not be performing in Canada any more following the attack.