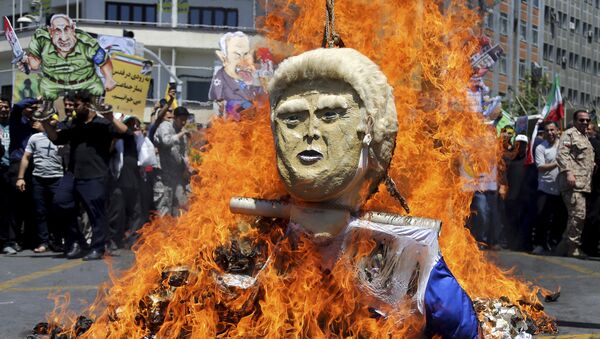 The statement comes after US Secretary of State Mike Pompeo tweeted on Monday that Iran had rejected his proposal to visit Tehran to address the Iranian people.

US President Donald Trump has taken to Twitter to claim that despite Iran never winning a war; the Islamic Republic “never lost a negotiation”. He did not elaborate.

The remarks followed US Secretary of State Mike Pompeo arguments on Monday that Iran did not accept his offer to go to Tehran and address the Iranian people.

"I recently offered to travel to Tehran and speak directly to the Iranian people. The regime hasn't accepted my offer", he tweeted.

Last week Trump admitted that "it is getting harder for me to make a deal with Iran", he seemed to refer to the new agreement to replace the 2015 Iran nuclear deal, also known as the Joint Comprehensive Plan of Action (JCPOA).

Pompeo had pointed out that Trump is interested in talks with Iran but that he also wants to change Tehran's "behaviour".

US Special Representative for Iran Brian Hook, for his part, argued that Trump is sincere in his overtures to Iran to negotiate a new nuclear agreement. Hook added that Trump would be happy to sit down with Iran's leadership although Tehran has rejected diplomacy on many occasions.

Iranian President Hassan Rouhani, in turn, signalled Tehran's willingness for talks with the US but stressed that Washington should first scrap sanctions against the Islamic Republic.

"We are always ready for negotiation. I tell you this hour and this moment to abandon bullying and lift the sanctions and return to logic and wisdom. We are ready", Rouhani pointed out earlier this month.

He added that Iran had shifted its approach from "strategic patience" to "reciprocal action" and would respond in kind to any of Washington's steps related to the nuclear deal.

Tensions between Washington and Tehran have been simmering since Trump unilaterally withdrew the US from the JCPOA on 8 May 2018, also reinstating several rounds of harsh economic sanctions against Iran.

Exactly a year later, Tehran announced its own decision to partially suspend some of its obligations under the deal and gave the other signatories - France, Germany, the United Kingdom, Russia, China, and the European Union - 60 days to save the accord by facilitating oil exports and trade with Iran.

On 7 July as the deadline expired, Iranian Deputy Foreign Minister Seyed Abbas Araghchi announced that Tehran was ready to start enriching uranium beyond the 3.67 per cent level set in the JCPOA and that Iran would continue to gradually abandon its nuclear commitments every 60 days.

European signatories to the JCPOA called for a dialogue between all parties to the deal, warning that it risks falling apart due to the US sanctions against Iran and Tehran's decision to partially discontinue its obligations.

Adding to tensions was the deployment in May of a US aircraft carrier strike group and additional troops to the Persian Gulf, in what US National Security Adviser John Bolton described as a "direct message" to Iran.

In a separate development in June, Iran's Islamic Revolutionary Guard Corps said that they had downed a US spy drone, while Washington claimed that the unmanned aerial vehicle was shot down over international waters. Later, Tehran became embroiled in a tit-for-tat tanker war with the UK, a staunch US-ally, following the detention of the Iranian tanker Grace-1 by Royal Marines near the Strait of Gibraltar on 4 July.