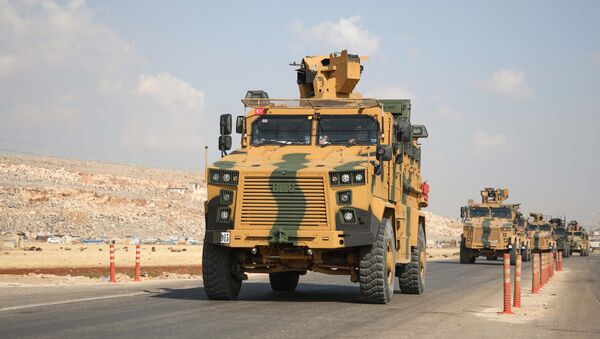 "Minister Akar had a phone call today with U.S. Secretary of Defense Mr. Esper. During the call, Minister Akar stated that Turkey’s expectation from the U.S. is to terminate entirely its support for the PKK/YPG [Kurdistan Workers' Party (PKK) and the Kurdish People's Protection Units (YPG)] terror organization", the statement read.

Akar reiterated that Ankara wants a safe zone an average 30-40 km to the south of its border with Syria, east of the Euphrates River, that would be controlled by Turkey in coordination with the United States and be completely cleared of the PKK and YPG, whom it views as a single organization and regards as terrorists, the statement added.

"With regards to the Safe Zone to be established in the north of Syria, Minister Akar emphasized that Turkey is the only appropriate, ready and capable force in the region to control and provide security in that zone", the statement read.

According to the text, Akar stressed that should Ankara and Washington fail to reach an understanding on the matter, Turkey will establish the safe zone unilaterally.

Last week, Akar warned of a possible Turkish operation in northern Syria if the safe zone talks with the United States do not bring about results.

Ankara has been fighting the PKK, which seeks to establish a Kurdish autonomy in Turkey, since the early 1980s. Turkish security forces carry out regular anti-PKK raids both domestically and in neighboring Syria and Iraq.

Last December, Erdogan announced that Ankara was ready to launch an offensive against the Kurdish militia in then Kurdish-controlled Syrian city of Manbij. However, following a phone conversation with US President Donald Trump, he announced postponing the operation. Trump, in turn, announced the withdrawal of US troops from Syria after that call.

In January, Trump proposed to establish a buffer safe zone as a solution to tensions between Turkey and the US-allied YPG militia. Negotiations on the safe zone continue as the two countries have yet to reach a final agreement on how deep the safe zone should be and what Ankara's role in Syria would be.