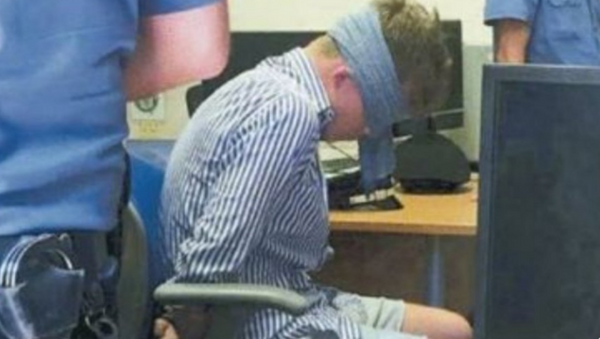 A photograph of an American teenager being illegally blindfolded while handcuffed after his arrest following the killing of a police officer in Rome, Italy, has been widely shared by news sources.

Gabriel Christian Natale-Hjorth, 18, was blindfolded "for a very few minutes” on Friday before he was interrogated in a police station about the murder of Italian military police officer Mario Cerciello Rega, Rome Provincial Commander Francesco Gargaro told AP.

​In the photo, Natale-Hjorth can be seen blindfolded at a police station with his head bowed.

“The general command of the [military police] Carabinieri disassociate themselves from the release and disclosure of photos of persons arrested for the murder of [officer] Mario Cerciello Rega,” the Carabinieri, or the national gendarmerie of Italy, said in a Saturday statement obtained by Reuters.

“The Carabinieri command in Rome is carrying out with extreme urgency an investigation to identify who is responsible.”

Rome’s prosecutor general Giovanni Salvi has also started a disciplinary inquiry in order to determine who decided to blindfold and handcuff the suspect.

According to the New York Times, Natale-Hjorth, along with 19-year-old American teenager Finnegan Lee Elder, both from San Francisco, California, admitted to stabbing Cerciello Rega on Friday morning after the officer tried to recover a backpack the two teens had stolen.

The two teens were arrested in a hotel room in Rome as they were preparing to depart the country, the Carabinieri reported.

Police officers found a “knife of considerable size” and clothes the men had worn during the murder placed behind a panel in the hotel room ceiling, the New York Times reported, citing a statement obtained from the Carabinieri press office.

According to a military police spokesperson, the Americans had asked an unidentified Italian man where they could buy drugs. The man directed them to a seller, and the two teens bought drugs from that individual. However, the products weren’t “real drugs,” according to the teens, and so they attempted to locate the seller again. When they weren’t successful, they sought out the first Italian man who had directed them to the seller and stole his backpack, which contained his phone, police said. When the man called his phone in an effort to locate his belongings, the teens allegedly requested “100 euros and a gram of cocaine.”

The teens made an appointment with the owner of the backpack to meet near the hotel where they were staying. However, instead of showing up at the designated location, two officers went to the meeting instead, after the victim of the theft notified the Carabinieri of the situation.

During the meeting between the teens and the police officers, Elder stabbed Cerciello Rega eight times, police said. It is unclear if Natale-Hjorth is also accused of stabbing the officer.

Following the incident, Elder’s family released a statement, saying, “We are shocked and dismayed at the events that have been reported.”

“We write as a family to express our deepest condolences to the grieving family and community that loved Brigadier Cerciello Rega.”

Italy’s Interior Minister Matteo Salvini, however, disregarded the controversy over blindfolding Elder. “To those who complain about the blindfolding of a person arrested, I remind them that the only victim to cry for is a ... Carabiniere ... who died while doing his job, killed by people who, if guilty, deserve spending their life in prison,” Salvini tweeted Sunday.