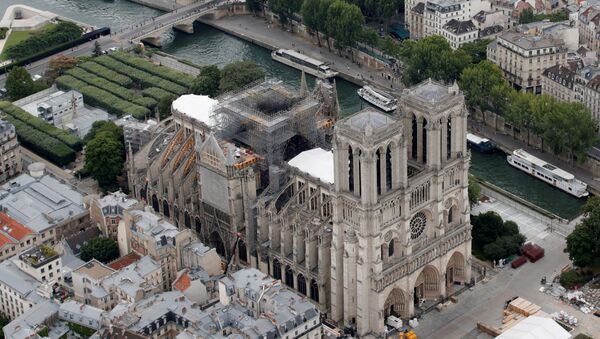 On Wednesday, French weather service Meteo France issued a red-level heat wave advisory for several cities in North and Central France, including Paris. The advisory urged residents and tourists take "absolute vigilance" over the next few days, as the heat wave is predicted to last through Friday.

Record-breaking temperatures also may pose a problem for the Notre Dame de Paris’ stone walls, which, according to chief architect Philippe Villeneuve, still remain saturated with water from the April 15 firefighting efforts.

The architect fears the extreme temperatures may speed up the drying process and ruin the building’s structural integrity – or worse.

“I am very worried about the heat wave,” Villeneuve told reporters Wednesday, as reported by Reuters. “What I fear is that the joints or the masonry, as they dry, lose their coherence, their cohesion and their structural qualities.”

Villeneuve added that if that were to happen, Notre Dame’s vaulted ceiling, which already sustained damaged from the fall of the cathedral’s spire back in April, “could very well” collapse.

Last week, the National Assembly approved controversial legislation that aims to use pledged donations to rebuild the cathedral within a five-year timeframe. Prior to its passage, the bill was met with objections from MPs who expressed concern over the proposed deadline and what appeared to be a rush to finish the reconstruction by the 2024 Summer Olympics in Paris.

It is still unclear what architectural style the holy building will take on during its restoration process, but in May, French President Emmanuel Macron personally expressed an openness to a “contemporary gesture.” Meanwhile, Prime Minister Edouard Philippe backed a new spire "adapted to the techniques and the challenges of our era."