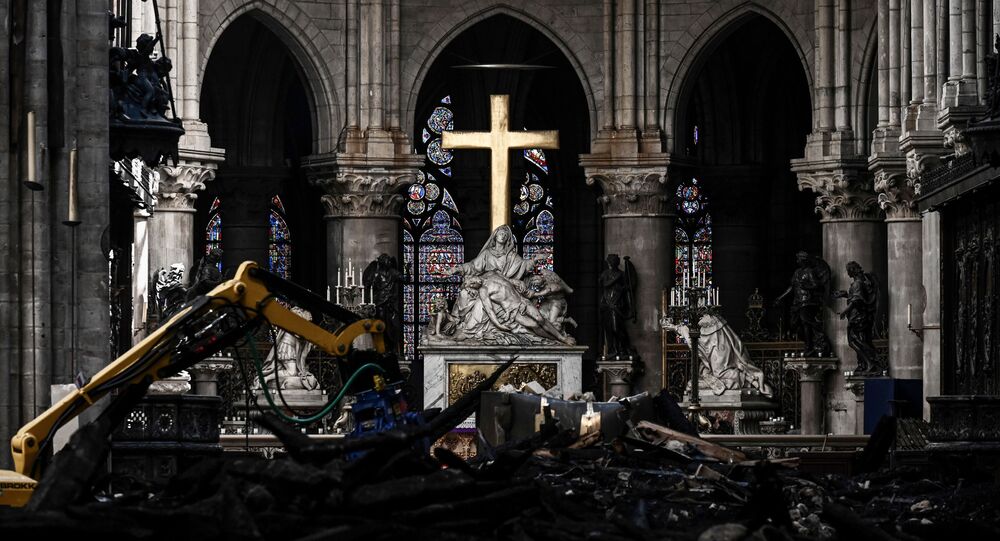 This weekend will mark the first mass held at the Notre Dame de Paris cathedral since it caught fire nearly two months ago, but most of those planning to attend may have to opt for a digital version of the service, according to the city’s diocese.

On Tuesday, the Paris diocese announced a small-scale mass led by Archbishop Michel Aupetit would be held Saturday evening in a “side chapel with a restricted number of people, for obvious security reasons.”

A mere 20 individuals, including the cathedral’s priests and canons, will be in attendance. However, the diocese clarified that numerous French television channels would hold a live broadcast of the Saturday mass for those wishing to attend.

According to the Tuesday announcement, the diocese is waiting on approval from French authorities on whether they can erect a temporary worship building within Notre Dame’s parvis – the cathedral’s front courtyard.

Following the April 15 blaze, French President Emmanuel Macron pledged to rebuild the house of worship "even more beautifully" and even said he would be open to a “contemporary gesture,” though many traditionalists hope to see a familiar, Gothic facade, complete with a replica of the 19th century spire designed by Eugène Viollet-le-Du.

French MPs have since adopted a draft law that aims to reconstruct the church within five years.

The destruction caused by the blaze, which was not extinguished until April 16, was not limited to the cathedral, however. In late April, a probe conducted by French authorities resulted in officials notifying residents that particles of lead had been discharged into the air from the damaged cathedral.

Police and regional health officials would later reveal the soil’s concentration of lead immediately around Notre-Dame de Paris contained an alarming 10 to 20 grams of the metal per kilogram of soil, compared to the normal 0.3 grams.

If the temporary structure is approved by French authorities, the diocese says the cathedral would resume evening prayers on the parvis.