Indian Judge Sparks Row, Suggesting ‘Superior’ Brahmins Should be at Helm of Affairs 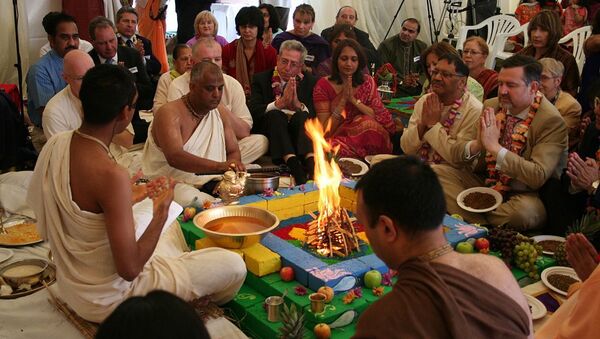 CC BY 2.0 / krishna_avanti_bhumi_puja / Yajna is a fire deity ritual, common in puja (pooja, Hindu prayers)
Subscribe
New Delhi (Sputnik): An Indian judge from the State of Kerala has stoked a controversy after a video clip showed him igniting the interest among Brahmins, saying they should voice their concerns over "economic reservation alone" and "not the caste or communal reservation". He also said, "the Brahmins are twice-born".

Speaking at the Global Meet of Tamil Brahmins recently, Justice V Chitambaresh, appealed to members of the Brahmin community from all over India and the world, saying: Brahmin are twice-born because of "good deeds in the previous birth".

He went on to appeal for the declaration of heritage zones in the Brahmin-only housing areas located in the southern Indian state of Kerala.

The Justice also stressed the need to preserve Vedic educational institutions and claimed that Brahmin should be at the helm of affairs because they are so "superior".

He continued, saying that Brahmins should voice their concerns over "economic reservation* alone" and "not the caste or communal reservation", adding: "It is time for you to deliberate as to whether reservation should be on the basis of community or caste alone."

Although admitting that while occupying a constitutional post, it may not be proper for him to express any opinion, he said: "I am not expressing my opinion at all". However, Justice Chitambaresh added: "But I am only kindling your interest or reminding you that there is a platform for you to agitate or to voice your concerns about economic reservation alone, and not caste or communal reservation."

Meanwhile, the statement by a sitting judge did not go down well with most citizens.

If a Sitting HC judge can say such remarks even in his personal capacity, I, as an individual and a citizen of a nation which is constitutionally secular, hold the right to call him a bigoted moron.
Such idiots should never hold the chair in judiciary. It is dangerous

Sad state of affairs., Strongly condemn Kerala High Court judge Justice V Chitambaresh for this discriminatory remarks. It is against Constitution of India which guarantees every Indian equality before law,no discrimination based on caste,creed and religion. pic.twitter.com/RUfD2szfmW

If the Kerala HC judge glorifies one caste over other he has not understood the Indian Constitution ! The Supreme Court should be asked to vacate his position !The least the SC should do is suo motu inquiry into this !

someone should look at all the judgements he has made, and check for caste bias.

A Brahmin is twice born, should be at the helm of affairs: Kerala HC judge Justice V Chitambareshhttps://t.co/PWbgHaTfHu pic.twitter.com/uBR7ScviLL

so the Kerala judge solemnly admits that they couldn't get the birth right for the first time, hence the second attempt? that's okay, it's like some backlog subjects in engineering that I had to clear.

The Brahmin community, comprised of hundreds of thousands of people, is a highly respected and privileged part of Indian society, especially among Hindus.

Millions of Dalits, Tribals, and members of other lower Castes, who occupy a low position in the Indian caste system, have been given quotas to support their development in government jobs and educational institutions since independence from the British in 1947.

Currently, the Narendra Modi government has in a first, introduced a 10% quota in the annual budget, for those who have a yearly income of around $11,500 and are not enjoying any other quota-based benefits.

*The caste-based reservation system is an affirmative action program created to protect oppressed castes in India from discrimination based on caste.