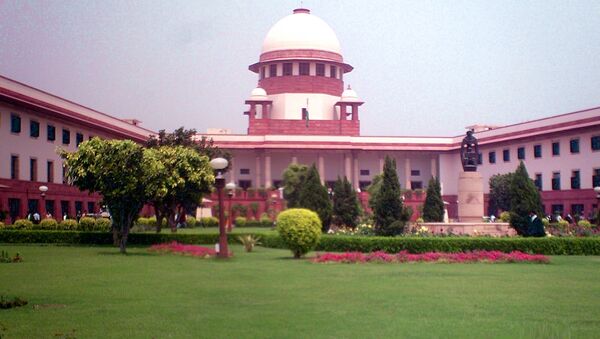 New Delhi (Sputnik): Concerned that corrupt local officials may allow foreigners to be included in the NRC draft list, the Indian government has requested that the court extend the 31 July deadline to publish a final list of people in Assam, for inclusion in the National Register of Citizens (NRC).

The Government of India has vehemently called for the deportation of all illegal immigrants settled in various parts of the country, some of them for many decades.

"The Centre is committed to deal strictly with illegal immigrants. India cannot be a refugee capital of the world," Solicitor General Tushar Mehta said representing the Government in court. Tushar likewise suggested that corrupt officials may have included the names of thousands of illegal immigrants living in border districts into the NRC (National Register of Citizens).

A sample re-verification of at least 20% of NRC  inclusions for people residing in Assam districts bordering Muslim-dominated Bangladesh is required, the Solicitor General said before the court.

The Indian government launched a citizen identification process in Assam in 2017, fearing millions of Bangladeshis had illegally entered India’s territory after Bangladesh was created in 1971.

Under the supervision of the Supreme Court of India, the process to identify such immigrants is underway, and the Registrar General of India submitted a draft report before the Court on July 2018. The report included around 289 million people, finding a total of four million of them ineligible for NRC inclusion.

Earlier this month, the court, while hearing a case on the status of nearly 40,000 Rohingyas Muslims, also agreed to decide whether these "illegal immigrants" can even be allowed “refugee” status.

India has already started the process of identifying and deporting around 40,000 Rohingyas to the land of their origin, Myanmar. They had fled Myanmar fearing execution and discrimination at the hands of the army, in Myanmar's Buddhist-majority Rakhine state.

The Indian government is determined to implement a similar process across the country, to identify and deport illegal migrants on its territory. Amit Shah, former president of the ruling Bharatiya Janata Party and currently India's Home Minister, spoke out on the issue using deprecatory language to characterize migrants.

“The illegal immigrants are like termites. They are eating the grain that should go to the poor, they are taking our jobs,” Shah said in April during an election rally, in the run-up to the general elections.