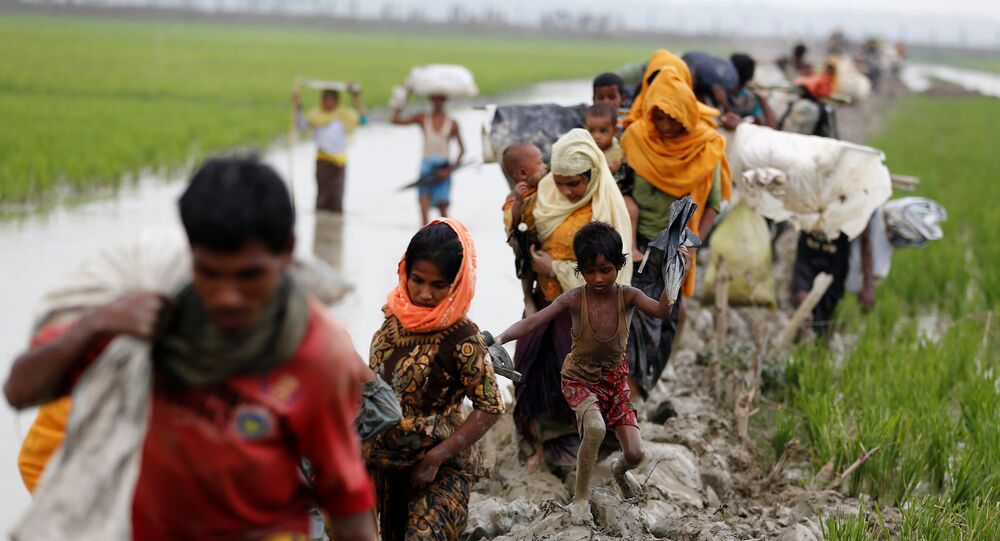 India’s Union Ministry of External Affairs called the experts’ statement castigating India misleading and incorrect. It clarified that all deportation proceedings had taken place in adherence with Indian laws and its legal procedures.

New Delhi (Sputnik): India denounced the five UN Human Rights Council experts who condemned the Indian government's decision to deport three Rohingyas to Myanmar, saying the statements made by them are misleading and incorrect.

On Thursday, India's Ministry of External Affairs clarified that the decision had been taken according to Indian laws and only conformed to the directives laid down by courts.

"The interpretation made of the facts of the case, as portrayed in the statement, are misleading and incorrect. The repatriation of illegal immigrants to their country of origin is in accordance with Indian laws", Raveesh Kumar, spokesperson, India's Ministry of External Affairs, said on Thursday during a weekly media briefing.

© AP Photo / Dar Yasin
India Deploys Additional Army Units Along Myanmar Border As Threat Escalates
Last week, three Rohingyas, who had illegally entered India in 2013 and were lodged in a foreigner detention camp inside Tezpur jail in Assam's Sonitpur district, were deported to Myanmar. On 3 January 2019, five Rohingyas also lodged at Tezpur jail since 2014, were deported, while in October 2018, seven Rohingyas were deported through Moreh along the Indo-Myanmar border. These deportations took place after the Indian Supreme Court allowed the government to do so, categorically saying that the court will not interfere in the government's decision to deport Rohingyas.

"Government will continue to take actions as may be necessary for the implementation of Indian laws, and as directed by our judiciary", Kumar added.

"We are dismayed by the decision of Indian Government to continue forced returns of Rohingya to Myanmar, where they face high risk of attacks, reprisals and other forms of persecution because of their ethnic and religious identity", said a joint statement from the experts.

© AP Photo / Abhisek Saha
Bangladesh Seeks India's Help in Convincing Myanmar to Take Back Rohingyas
It is estimated that there are around 40,000 Rohingyas currently staying in different parts of the country. However, fearing detention and harassment from the authorities, several incidents of them fleeing the country from the porous Bangladesh border have been reported in the past few months.

"We also remain concerned with the systemic use of indefinite detention of Rohingyas in India, which is indicative of the unacceptable conditions of discrimination and intolerance they face in the country where they have sought refuge", said the experts.

Thousands of Rohingyas fled to India and Bangladesh in 2017 from Myanmar's western Rakhine state after a major crackdown was launched against them by the Myanmar security forces beginning August 2017.