Quite Nimble for a Trillion Tonne Object: Monster Iceberg on the Move Again, Satellite Imagery Shows 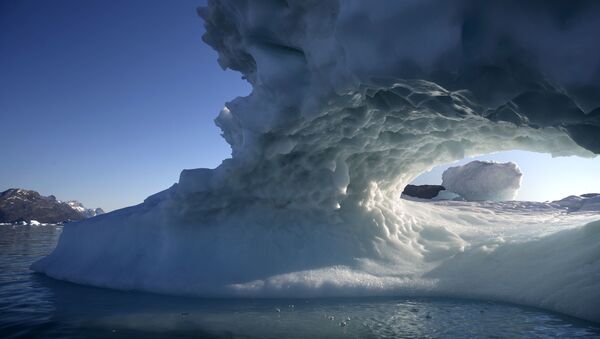 © AP Photo / David Goldman
Subscribe
In July 2017 a crack in Antarctica's Larsen C ice shelf caused a trillion tonne chunk of ice, dubbed iceberg A-68, to break off, sparking fears it could disintegrate into pieces too small to track on satellites and drift into shipping lanes.

Experts tracking one of the world's biggest icebergs, dubbed A-68, that broke off from Antarctica two years ago, claim it has been on the move, covering over 155 miles towards South Georgia after rotating 270 degrees, reports MailOnline.
A geography professor at Swansea University in Wales and glacier expert Adrian Luckman have published an animation of the glacier's movements between 6 January, 2018 and 10 July 2019 on his blog.

“For an object weighing around one trillion tonnes, Iceberg A68 appears to be quite nimble,” Professor Luckman wrote.

The expert explained that for a year after initially breaking off from its parent shelf, in mid-2018 the iceberg found itself prey to the Weddell Gyre, a clockwise ocean current, that spun it around 270 degrees and proceeded to carry the chunk of ice 250km north.

“The iceberg is 100 miles (160 km) in length yet only 656 feet (200 metres) thick - a similar ratio to a credit card - so it is surprising how little damage it has sustained in its journey so far,” enthused Luckman.

In early July 2017, a huge crack in Antarctica's Larsen C ice shelf caused a massive iceberg - dubbed A-68 - to break free, initially sparking concerns that it could break up into pieces too small to track and present a dangerous hazard to shipping lanes.

In September 2018, scientists tracking A-68 with satellites discovered that after staying put for a while, the ice monster had begun to spin and swing northward.

The vast swathe of ice has a mind-boggling volume of twice that of Lake Erie – one of the five Great Lakes in North America. When it first split, scientists anticipated it to begin disintegrating quickly. However, it has remained mostly intact.

Satellite records for A-68, which weighs more than one trillion metric tonnes, suggest it is the sixth largest iceberg currently floating in the Earth's oceans.

The phenomenon of iceberg calving is a natural one, as inland glaciers supply coastal ice shelves with new ice, thus pushing older ice out to sea.
However, according to some experts, increasing evidence suggests rising water and air temperatures caused by global warming are triggering instabilities along the coasts of Antarctica and Greenland, speeding up the melting and calving rate.

As A-68 separated from Larsen C, an ocean that had stayed hidden under the ice shelf for 120,000 years became revealed to scientists, with a team led by Cambridge-based British Antarctic Survey now studying the mysteries of the long-hidden ecosystem.

000000
Popular comments
Google him UAE coordenates, they are willing of towing one toward´s theyr shore´s. Who knows the amouint of money they going to spare let alone theyr shame.