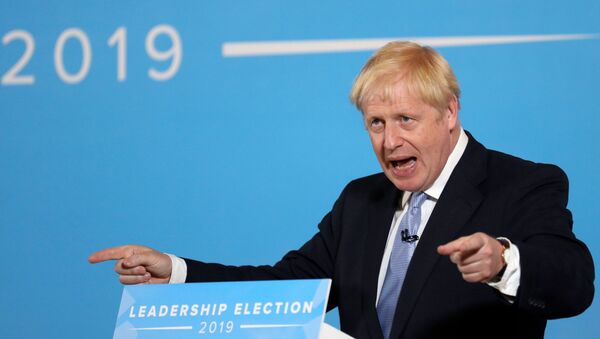 © REUTERS / Peter Morrison/Pool
Subscribe
Boris Johnson is widely expected to beat Jeremy Hunt in the ballot of 160,000 Conservative Party members to be named the new leader and de facto Prime Minister on 23 July. But a spanner has been thrown into the works of his plan for a no-deal Brexit.

The head of the World Trade Organisation, Roberto Azevedo, has said Boris Johnson’s plans to carry on trading with Europe in the event of a no-deal Brexit are unworkable.

Boris Johnson has argued that if the UK cannot renegotiate a new deal with the EU before 31 October and it ends up crashing out without a deal, businesses could carry on tariff-free trade with Europe under Gatt 24.

Officially known as Article 24 of the WTO’s General Agreement on Tariffs and Trade, it was designed “to allow trade to continue allows countries who are negotiating a free-trade area or customs union to have an interim agreement on trade tariffs for a period of up to ten years.”

But Mr Azevedo, the director general of the WTO, said in an interview with Prospect magazine the mechanism cannot be invoked unless the parties involved have reached agreement on a future trade deal.

The terms of Gatt 24 is that there has to be a “plan and schedule” agreed for concluding a final deal.

Mr Azevedo said: “If there is no agreement, then Article 24 would not apply, and the standard WTO terms would.”

"If there is no agreement, then Article XXIV would not apply, and the standard WTO terms would." Big intervention!https://t.co/9UnHfiOa2C

​Businesses and consumers in Britain fear that in the event of a no-deal Brexit, goods traded between the UK and the EU would be subject to standard WTO tariffs, which would make products in British supermarkets and shops considerably more expensive and exports less competitive.

WTO terms involve tariffs of 10 percent on most cars and 35 percent on dairy products.

The Attorney General confirmed that in a No Deal Brexit, article 24 of GATT cannot be invoked unilaterally by the UK; and the EU can't and won't participate bilaterally. No Deal means the end of tariff free trade between the UK and EU - #Boris is wrong. pic.twitter.com/S0n3bUg97Y

​Mr Johnson’s plan for a no-deal Brexit have already been undermined by International Trade Secretary Liam Fox, who is backing Mr Hunt for the leadership.

Mr Fox said Gatt 24 would not work and added: “A no-deal scenario, by definition, suggests that there would be no mutual agreement between the UK and the EU on any temporary or permanent arrangement. In those circumstances Article 24 cannot be used.”

Last month the governor of the Bank of England, Mark Carney, told the BBC: "The Gatt rules are clear. Gatt 24 applies if you have an agreement, not if you've decided not to have an agreement, or you have been unable to come to an agreement. We should be clear that not having an agreement with the European Union means that there are tariffs."

000000
Popular comments
EU will spare no effort to get an agreement with the UK because it has much more to loose than the UK. Commercial balance sheet is negative for the UK.
Albert44
9 July 2019, 12:36 GMT1
000000
Not the sharpest pencil in the box, which describes most in the government.