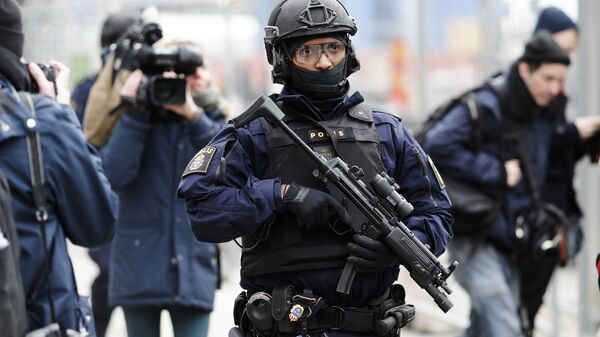 © AP Photo / Markus Schreiber
Subscribe
Despite Prime Minister Stefan Löfven's pledge to “crack down” on rampant gangland violence in immigrant-heavy districts, the curve of weapons-related incidents has shot up in recent years.

According to Chief of Police Anders Thornberg, this is the new normal.

Despite assuring his compatriots that the police's capacity to handle criminal gangs will improve owing to staff expansion in the coming years, he doesn't believe that the police will be able to “crack down” on the gangs, as Prime Minister Stefan Löfven earlier promised.

Instead, Thornberg called for Swedes to get used to violence in the years to come.

“This may continue for five to ten years in these particularly vulnerable areas”, Anders Thornberg told the newspaper Aftonbladet, using the popular euphemism that has replaced the term “ghetto” in political and media parlance.

According to Thornberg, the shootings are closely linked to drug trafficking.

“It's about drugs too. Drugs are deeply rooted in the community and it is ordinary people who buy them. There is a market, and the gangs are fighting for it. Much is about drug trafficking”, Thornberg explained.

According to him, all of Swedish society must contribute to stopping serious crime.

“In the long run, it is a vital issue for Sweden to crack this trend. It will have consequences you commit crimes when young. From the police side, we cannot solve this overnight. We want all the good forces in society to do their job”, Thornberg said.

This past Sunday, Stockholm alone saw three different shootings in a matter of four and a half hours, prompting strong condemnation.

Forsell predicted that this development will escalate.

“Society is becoming increasingly raw. In June, there were 41 shootings in a single month, which is a new record. Unfortunately, I believe we will see even more of them”, Forsell ventured.

The number of shootings in Sweden has increased exponentially in recent years, which the police attribute to gang conflicts in “particularly vulnerable areas”, that is areas marked by urban blight, immigration, unemployment, and rampant crime. According to a report by the National Operational Department, residents in such areas are often too terrified to turn to the authorities for fear of retaliation.

A 2019 police report listed 60 “vulnerable areas”, with many of them sharing an overwhelming percentage of non-Swedes, such as Stockholm's Alby, Fittja and Rinkeby or Örebro's Vivalla, where up to 90 percent of residents are of immigrant descent. Several Swedish politicians condemned the publication of such lists, calling this practice “stigmatisation” and urging to abandon it altogether.

000000
Popular comments
No! We shall NOT bend a knee and accept criminal migrants that does rape, drug- and human trafficing. Nor their violence. Accepting that is accepting a failed state, and Sweden is yet not a failed state. Having over 100 bomb and terror blast 2019, rape numbers second to highest rape-town in the World and a shooting similar to Mexico requires actions. No actions, no social trust, no taxes.
Glamoureus
8 July 2019, 11:19 GMT3
000000
Glamoureus, Sweden is already a failed state. A failed state like Sweden has 2 different legal systems. For example, if an non-European immigrant commits a major crime the legal system present all the excuses it can find to minimise the offence followed by a little finger pointing and that is all. If a Swedish (indigenous) person commits the same crime, "god help him", he/she will be publicly presented with number and name including pictures in all the papers, followed by a heavy prison verdict by the court.
Robert Klimenko
8 July 2019, 12:54 GMT1
000000
Newsfeed
0
New firstOld first
loader
LIVE
Заголовок открываемого материала
Access to the chat has been blocked for violating the rules . You will be able to participate again through:∞. If you do not agree with the blocking, please use the feedback form
The discussion is closed. You can participate in the discussion within 24 hours after the publication of the article.
To participate in the discussion
log in or register
loader
Chats
Заголовок открываемого материала
Worldwide
InternationalEnglishEnglishMundoEspañolSpanish
Europe
DeutschlandDeutschGermanFranceFrançaisFrenchΕλλάδαΕλληνικάGreekItaliaItalianoItalianČeská republikaČeštinaCzechPolskaPolskiPolishСрбиjаСрпскиSerbianLatvijaLatviešuLatvianLietuvaLietuviųLithuanianMoldovaMoldoveneascăMoldavianБеларусьБеларускiBelarusian
Transcaucasia
ԱրմենիաՀայերենArmenianАҧсныАҧсышәалаAbkhazХуссар ИрыстонИронауОssetianსაქართველოქართულიGeorgianAzərbaycanАzərbaycancaAzerbaijani
Middle East
Sputnik عربيArabicArabicTürkiyeTürkçeTurkishSputnik ایرانPersianPersianSputnik افغانستانDariDari
Central Asia
ҚазақстанҚазақ тіліKazakhКыргызстанКыргызчаKyrgyzOʻzbekistonЎзбекчаUzbekТоҷикистонТоҷикӣTajik
East & Southeast Asia
Việt NamTiếng ViệtVietnamese日本日本語Japanese俄罗斯卫星通讯社中文（简体）Chinese (simplified)俄罗斯卫星通讯社中文（繁体）Chinese (traditional)
South America
BrasilPortuguêsPortuguese
NewsfeedBreaking
08:56 GMTCIA Reportedly Warned US Military of Likely Presence of Children Near Afghan Drone Strike Target
08:56 GMTFrance, Russia Agree Modalities of Settling Champagne Import Controversy, Minister Says
08:28 GMTThere's No Unreleased Sex Tape of Kim Kardashian, Lawyers Say on Claims of 'Graphic & Better' Part 2
08:26 GMTMan Attacks Guards Over Refusal of Entry Without Health Pass in France, Reports Say
07:38 GMTAustralia Had 'Grave' Concerns Over French Submarine Capability, Prime Minister Says
07:33 GMTEight Dead, 7 Missing in China After Passenger Ship Capsizes
07:33 GMTBoris Johnson Slammed for 'Casual' Approach to National Security, 'Unclear Prioritisation of Risks'
07:16 GMTBritish Boxer Amir Khan 'Kicked Off' US Flight Over Row About Colleague's Face Mask
06:55 GMTAs US Prepares to Leave Iraq, Ex-Advisor to Iraqi President Says Kurds Need Reliable Partners
06:52 GMTTwo Women Arrested for Tearing Up Trump Signs and Snatching MAGA Hat From Child Escape Jail Time
06:46 GMT'F**k Joe Biden!' New Yorkers Take to Streets to Protest Vaccine Mandates, Link COVID Rules to Nazis
05:56 GMTAustralia May Rent or Buy Nuclear Subs From US, UK Until Its Own Fleet is Built Under AUKUS Deal
05:34 GMTColombia Condemns Maduro’s Participation in Celac Summit
05:14 GMTOver 50 London Police Officers Deployed to Oxford Street After Reports of Gunman - Video
04:30 GMTNot My Style: Adorable Golden Retriever Doesn't Like Wearing Shoes
04:26 GMTLive Updates: India Registers 30,773 New COVID-19 Cases
03:52 GMTMeghan Markle Wears Earrings Made of Same Diamonds That Decorate Her Mysterious Pinky Ring - Report
03:12 GMTIsraeli Security Forces Capture Last Two Fugitives Who Escaped From Gilboa Prison, IDF Says
03:10 GMTFrench Blindsided as AUKUS Details Were Discussed at G7 Summit Leaving Macron Out - Report
02:25 GMTBiden Administration Worried High-Level UN Meetings Will Become COVID-19 ‘Superspreader’ - Report