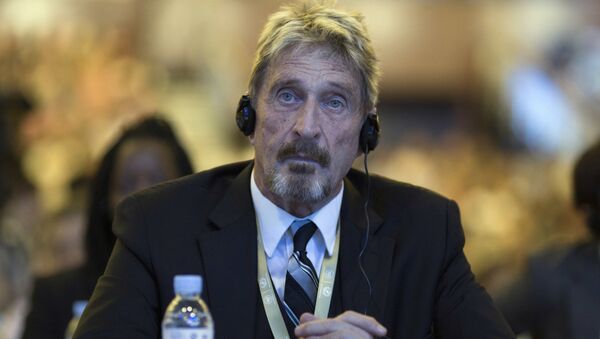 © AP Photo / Ng Han Guan
Subscribe
The creator of one of the earliest antivirus software products claims he is wanted in the US as a criminal, but there is no proof that his claims are true. The notorious counter-culture figure attempted to run in 2016 but lost to Libertarian nominee Gary Johnson.

US eccentric millionaire and former software tycoon John McAfee, known for one of the earliest antivirus programs, has announced his intention to run for the US presidency, France 24 reported Saturday. He is running for the Libertarian Party, as he did in 2016.

McAfee claims he is wanted in the United States “as a criminal” for tax evasion. Last year, a Florida court found him “liable” for the death of a neighbour in Belize and ordered him to pay the victim’s family over $25 million.

"I am wanted as a criminal by the government for which I am running for president," he told AFP. "I have not paid taxes for eight years. I will not pay taxes again -- it is unconstitutional and illegal."

US tax authorities deny McAfee’s claims. There is no legal requirement in the US Constitution which prevents a wanted criminal suspect from running for the presidency. Under the US Constitution, a candidate must be born in the United States, be a US resident for at least 14 years and be at least 35 years old.

However, McAfee himself is treating his presidential run in an unexpected fashion, France24 report says.

"I don't want to be president, I really don't, nor could I be. Really, look at me. I can't be president,” he says. “However, I do have a large following, and I will influence this next election."

It is unclear how exactly McAfee plans to campaign, since he currently resides on a yacht docked in Cuba, in violation of US sanctions on the island nation, according to France24.

His 2016 presidential attempt was thwarted by Gary Johnson, who won the party’s nomination and proceeded to win over 3 percent of the vote in the general elections.

McAfee founded his antivirus company in the late 1980s as a response to early virus-like software spreading across computer networks. He invented an innovative business model of giving away his software for free for individual users while charging corporate clients. In 2011, his tech company McAfee LLC was bought by Intel for approximately $7 billion.

In 2012, Belize police raided his house over suspicion of murder; however, after the raid, Belize police dropped all charges. The same year, McAfee was arrested in Guatemala on charges of illegal entry and deported to Belize.

After he spent some time in the US, where he was arrested for driving under the influence of drugs, he ended up in Cuba, where he offered his talents to the Cuban government, vowing to develop a cryptocurrency that would allow the nation to evade US sanctions.

He says he will remain in the island nation until the US 2020 elections.

"Cuba has never extradited an American citizen," he notes, "and Cuba is not exactly a friend of the US government."

The US has filed no extradition request on McAfee, France24 reports, adding that the two countries do cooperate on legal matters, with Cuba extraditing a US citizen wanted for murder last year.