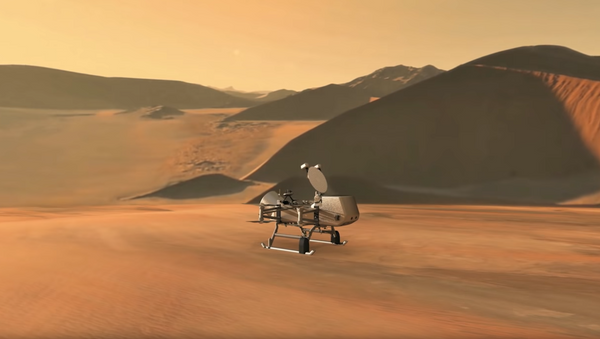 Saturn’s largest moon, Titan, has been selected as the destination for NASA’s next exploratory mission within the solar system, according to a NASA official who notes the body could reveal the secrets of early or even current alien life forms due to its liquid methane seas, lakes and rivers.

NASA administrator Jim Bridenstine revealed Thursday that NASA Solar System, the agency’s planetary science division, would be expanding the limits of technology and embarking on an endeavor “unthinkable” years ago with its new, moon-based mission “Dragonfly.”

According to the NASA official, Titan, the largest of Saturn’s 62 moons, is “unlike any other place in our solar system and the most comparable to early Earth,” which means studying the moon could provide clues on how life emerged on our planet. Slated to leave Earth in 2026 and land on the celestial body in 2034, the multi-rotor drone will hopefully be able to “evaluate habitability and search for chemical signatures of past, or even present life.”

Titan is not only larger than Mercury, but it is also the second largest moon in our solar system behind Jupiter’s Ganymede. The US agency’s researchers have been interested in the liquid-bearing body to the point that NASA’s Janelle Wellons told Reddit users that, with the right equipment, Titan “seems like an awesome place to live”

BIG NEWS: The next @NASASolarSystem mission is… #Dragonfly – a rotorcraft lander mission to Saturn’s largest moon Titan. This ocean world is the only moon in our solar system with a dense atmosphere & we’re so excited to see what Dragonfly discovers: https://t.co/whePqbuGBq pic.twitter.com/BQdMhSZfgP

“Titan has a nitrogen-based atmosphere like Earth. Unlike Earth, Titan has clouds and rain of methane,” NASA’s Thursday press release on the mission explained. “The moon’s weather and surface processes have combined complex organics, energy, and water similar to those that may have sparked life on our planet.”

Utilizing 13 years’ of the Cassini spacecraft’s data on Titan, the Dragonfly rotorcraft-lander will reportedly take “advantage of Titan’s dense atmosphere and low gravity” and conduct a series of short flights around the Saturn moon to collect relevant samples. Each segment of the 108-mile (175-kilometer) mission is said to range up to five miles (eight kilometers).

NASA notes this mission will be the first time the agency flies a multi-rotor aircraft or vehicle on another planet in the name of science.

The Dragonfly project was one of two concepts proposed by the agency when Sputnik reported on the rotorcraft and mission draft in December 2017.

According to the NASA release earlier that month, the other proposal in the running was the Comet Astrobiology Exploration Sample Return (CAESAR), a concept that included the sampling and analysis of comet 67P/Churyumov-Gerasimenko to determine its “origin and history.”

“Titan is unlike any other place in the solar system, and Dragonfly is like no other mission,” claims Thomas Zurbuchen, NASA’s associate administrator for Science at the agency’s headquarters in Washington, DC.