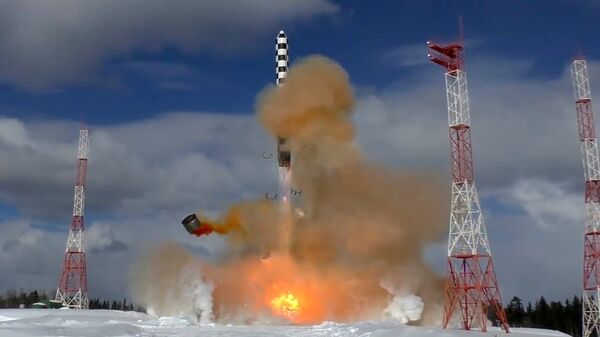 According to a booklet, presented as part of one of the event's exhibitions, Sarmat missile has the firing range of 18,000 kilometres (11,185 miles), while its launch mass totals 208.1 tonnes. Payload capacity of the missile amounts to less than 10 tonnes, the correspondent reported.

Sarmat intercontinental ballistic missile is one of the new weapons in Russia's strategic arsenal, which Russian President Vladimir Putin unveiled back in 2018. This type of missile is expected to replace Voyevoda ballistic missiles. First mass-produced Sarmat missiles are scheduled to enter service in 2021.

The 5th International Military-Technical Forum Army-2019 started in Patriot Park in the Moscow Region on Tuesday and will run until Sunday. Up to 120 nations participated in the forum's opening ceremony, which is twice more than in 2018. In addition, 101 foreign firms are partaking in the event.