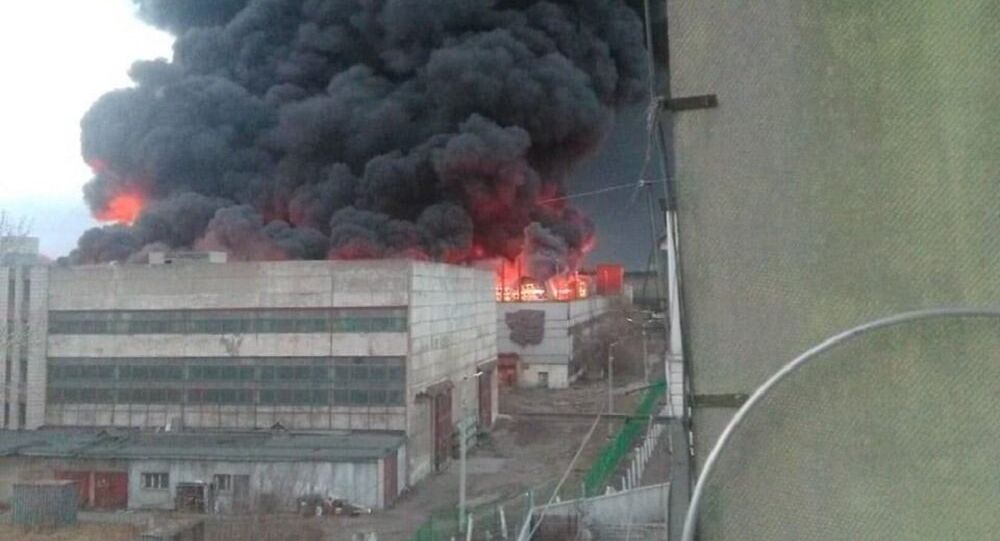 "The roof of one of Krasmash's buildings is burning", the department said in a press release.

As many as 38 people are already engaged in extinguishing the fire, and nine tank-vehicles have been deployed to fight the flames.

​At the same time, a source in the regional emergencies services has told Sputnik that the total area of the fire at the plant has reached 5,000 square metres (54,000 square feet), and a section of the roof has collapsed.

"The fire area is 5,000 square metres, and the roof has collapsed", the source said.

The source further noted that workshops for assembling Sarmat and Sineva missiles were located approximately one kilometre from the burning depot at the Krasmash plant.

"There is no threat of detonation of missiles, they are not equipped with warheads. The missile assembly shops are located about 1 kilometre from the burning depot", the source said.

The fire has been rated a four in terms of difficulty in extinguishing a blaze. A level four fire is considered the highest level in Krasnoyarsk, the source added.

The source added that a mobile laboratory to assess the concentration of harmful substances in the atmosphere had left for the site of the incident.

Krasmash produces Sineva ballistic missiles andthe new Sarmat intercontinental ballistic missiles, expected to replace the Voyevoda ballistic missiles. Modules of the upper stages of the Zenit and Proton carrier rockets are also produced there. Torches for the 2014 Winter Olympics, held in the Russian resort city of Sochi, were also made at Krasmash.