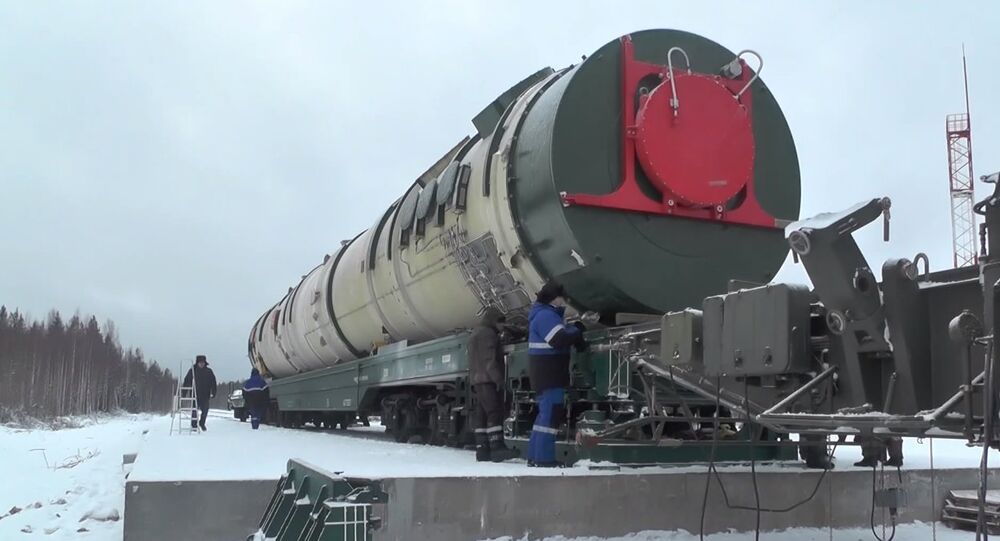 The Sarmat, a new intercontinental ballistic missile with a range of up to 11,000 km, is a strategic weapon of last resort capable of carrying up to 24 nuclear-armed independently targetable reentry vehicles (MIRVs), and has been touted as Russia's effort to preserve global strategic stability amid US plans to develop advanced missile defences.

Roscosmos chief Dmitri Rogozin has boasted about the Sarmat's capabilities in an interview with Russian television.

"This is a heavy ballistic missile that's capable of defeating, of ripping to shreds any literally any missile defence system to pieces, whether existing or prospective," Rogozin said, speaking to Russia-24 on Friday.

© Photo : Youtube / Минобороны России
Russian Military Reveals How US Could Intercept New Sarmat Missile
According to the official, once deployed, the Sarmat will become the backbone of Russia's strategic capabilities.

Rogozin added that Roscosmos's enterprises are on schedule in all major areas of the state defence order.

State testing of the Sarmat began last year, with mass production expected to start in 2020 and the first deployment to Russia's Missile Troops set to begin in 2021. Able to carry a variety of combinations of warheads and decoys, the Sarmat is also believed to be capable of deploying up to 24 nuclear-capable Avangard hypersonic glide vehicles.

Once deployed, the Sarmat is expected to serve as a deterrent to a number of Pentagon initiatives, including the attempt to build an effective missile defence shield, and the so-called Prompt Global Strike massed precision-guided conventional weapon airstrike program, which aims potentially include the elimination of an adversary's strategic response before it can be launched.