Trump Blasts Iranian Authorities as 'Not Smart', Says War With Tehran 'Would Not Last Long' 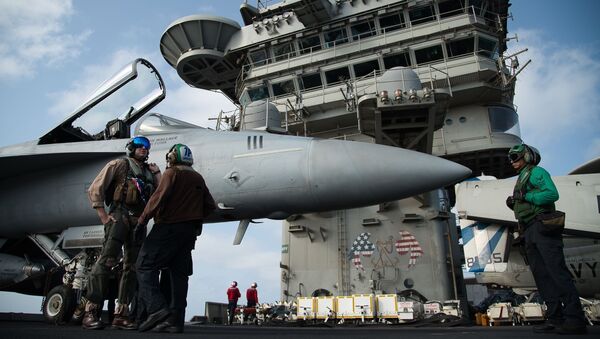 © AP Photo / Jon Gambrell
Subscribe
The US is "not going to need an exit strategy" if war breaks out with Iran, Donald Trump stated earlier in the day threatening Tehran with "obliteration" after Iranian President Hassan Rouhani claimed the White House is suffering from a "mental disability".

In an interview with Fox Business Network, US President Donald Trump said that Iranian authorities are "not smart" adding that the United States does not want a war with Iran, but a military conflict would not last very long if it occurs.

"I don't think their leadership is smart", Trump stated. "Iran is going down the tubes", he added, citing the new US sanctions as well as unrest in the country and other economic pressures.

Trump has expressed hope that Washington won't have to go to war with Tehran, but said such a conflict "would not last very long".

"I hope we don't but we're in a very strong position if something should happen", Trump noted when asked if a war was looming. "I'm not talking boots on the ground ... I'm just saying if something would happen, it wouldn't last very long".

The president noted that he does not want to send additional US troops to the Middle East, even in the event of an armed conflict.

The statement comes amid a long-lasting row between the United States and Iran that started last year after Washington withdrew from the 2015 Nuclear Deal.

On 24 June, the US imposed new sanctions on Iran’s Supreme Leader Ayatollah Ali Khamenei and eight senior commanders of Iran's Navy, Aerospace and Ground Forces of the Islamic Revolutionary Guards Corps following the downing of a US drone by Iranian forces.

After the incident, Trump claimed he ordered strikes on targets in Iran, but called off the attacks at the last minute because they would be a disproportionate response. Instead, Trump decided to unveil new sanctions.

The US-Iran tensions have seriously worsened the security situation in the Middle East. The United States, in particular, has begun building up its military presence in the region in what US National Security Advisor John Bolton called a clear message to Iran.

000000
Popular comments
aS ALWAYS, THE OLD TALKING FOR THE FOOLS BUT THE WALKING OF THE BRAVES WE AIN´T GOING TO SEE THEM DOING. iRANIAN´S AREN´T NATIVES WITH BOW´S AND ARROWS.