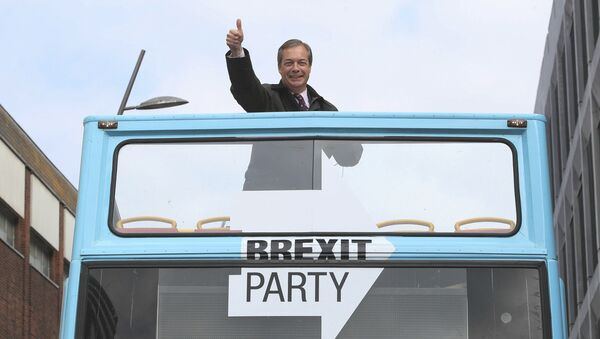 Nigel Farage has shared a hand-written note from a schoolboy, called Mathew, offering his most sincere and ardent support to the Brexit Party and slamming MPs for “ignoring democracy” by turning their backs on the results of the 2016 referendum on leaving the EU.

The letter from a 10-year-old Brexiteer, Mathew, evoked strong emotion from the Brexit Party’s co-founder Nigel Farage, who posted the message on Twitter and branded it “amazing”, but sparked a wave of angry comments.

An amazing letter received from fellow leaver Matthew, who is 10 years old. pic.twitter.com/6ZDTAeOanj

​The “fellow leaver”, as Farage described the young author of the letter, thanked the politician, saying: “Without you the Leave voters would have nobody to represent their opinions."

Mathew accused the “majority of MPs in Parliament” trying “to ignore democracy and overturn the referendum result” and complained about anti-Brexit propaganda in his school.

"At my school they try and brainwash us to be pro-EU but me and my friend Jim (fellow Leaver) know their tricks,” the boy wrote in the note.

Some commenters, however, expressed doubts that the message was genuine and used it to trash Farage.

That lettter is not from a 10 year old Brexit supporter. For starters he uses the correct use of their and can spell Parliament and democracy, something most Brexit Party supporting adults clearly struggle with.

I'd love to know what a handwriting expert thinks. My Mum's been a primary school teacher for nearly 40 years and isn't convinced. Either fake or has been copied under direction of an adult.

I'm certainly not a 54 year old man, which you can tell from my ocassional quirky spelling mostake. Nevertheless I understand that you capitalise the P in party when referring to a specific party.

Anyway, love the racism keep it up good sport.

The only way a 10 year old wrote this is if you held them at gunpoint and told him what to write, word for word

​Others mocked the letter itself.

I am writing to thank you for all the racisms you do, which I think are really good because I’m also quite a massive racist and so is my friend Cedric.

Please keep on being horrible and having brown teeth.

Matthew ponders his next correspondence..... possibly a detailed letter to Boris telling of the virtues of Article 24 of GAT pic.twitter.com/Eh7LaYlWNX